Jon and I just took some pictures with Scarlet in the backyard yesterday and since the grandparents have been complaining about my lack of pictures, I thought I would post them.

Oh but first, here are some pictures from this crazy plant nursery we have in town. They have parrots and all the big birds that talk just flying around. They have rabbits, cats, and these enormous tortoises. Scarlet is obsessed with animals right now and she got such a kick out of it. She is mostly into dogs... the turtles were a little slow for her. But she chased the cat halfway across the store. 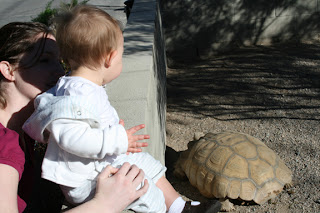 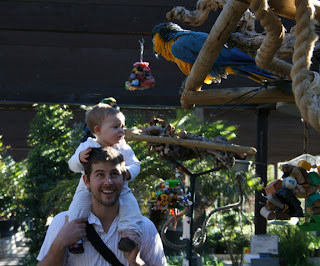 Ok these are the ones in the backyard. 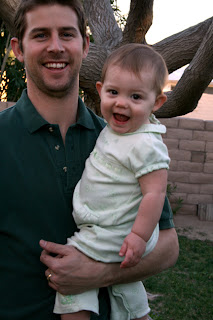 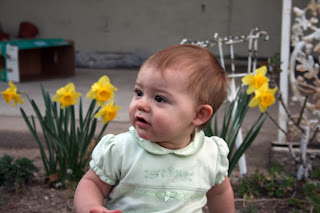 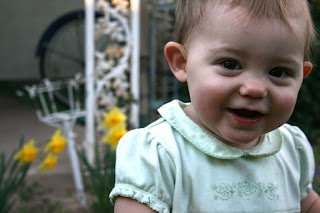 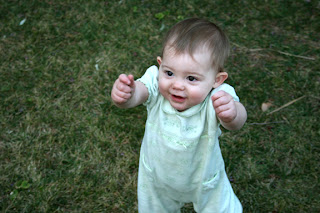 Jon always has all these crazy ideas for pictures. This one is his attempt to toss Scarlet in the air and then put his hands down so it looks like she is just flying up there on her own. 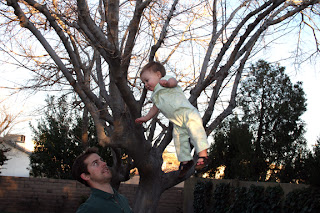 She walks everywhere now and has no problem leaving my side to go explore and talk to anyone who will listen. She says hi, dad, mom, and dog but never when you ask her to. And she has the appetite of a small elephant... I cant even imagine what she will weigh at her next appointment.

Also hopefully soon to come, she has already developed three signature Scarlet dance moves. Unfortunately they don't come out once the camera comes on, but I'm gonna catch her one of these days.
Posted by Kacey Nielsen at 8:26 AM 4 comments:

So Nice To Be Back!

After digging through several boxes last night we finally found our way to all the necessary computer parts and set it up. We were crossing our fingers the whole time hoping against hope that some free floating wireless internet signal would be waiting for us. And joy of all joys... it was! OH HAPPY DAY!!
I can't even tell you how great it feels to be back from the stone age. And to be writing this while staring into my backyard where there are daffodils blooming around the hedge... I won't lie it's pretty dang fabulous.
We officially bought our first house on Friday and moved in on Saturday. The neighborhood came out to greet us that night... well more precisely the neighborhood livestock. Two cats decided to break in the lawn outside our bedroom window with some extremely loud frolicking. Then, in the wee early hours of the morning, who was there to greet us but the neighborhood rooster. Yes, there is a rooster. And no, I don't know exactly where it lives or the neighborhood rooster would be no more.
For those of you who know anything about Vegas we are now in southern downtown Vegas just north of Green Valley. We are literally minutes from the airport and minutes from Jon's office. And thanks to the new takeoff path which sends the planes over the expensive neighborhoods of Summerlin, we don't even have a lot of plane noise. So far it has been a nice little set up.
I haven't been able to take pictures of the house yet so I only have the realtor pictures but they give an interesting view of the place. 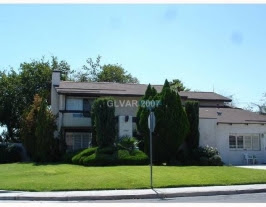 So here is the view from the front and then the backyard. I absolutely LOVE the backyard. As I said, there are beautiful flowers just popping up everywhere and two great big trees in the middle. So the front door is behind all those bushes and then the part to the side that looks like a garage is actually a studio apartment.

Now here are some of the inside. I can only find the downstairs photos for some reason. 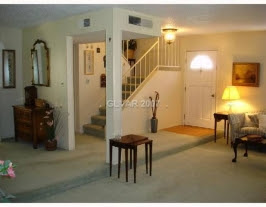 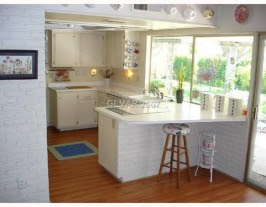 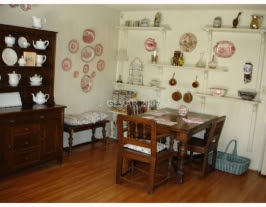 The woman that lived here before us was pretty up there in age and seriously, it is walking into your grandmas house in almost every room. Our room upstairs even has the floral curtains with the large puff on top. It's pretty fun. And there are all these old appliances built into the kitchen. There is a toaster that pops out of the wall and this odd thing that looks like the bottom of a mixer and it comes with like 5 thousand parts. So far we've found attachments for an ice cream maker, meat grinder, knife sharpener, blender, mixer, and several other unidentifiable objects.
Upstairs, the kids got to pick their own carpet back in the day so Scarlet's room is painted pink on every inch of wall with long shag pink carpet on the floor. The room next door is the same in blue. The carpet would almost be amusingly charming but 30 year old shag carpet... totally grosses me out so it's soon out the door. But until then Scarlet is fascinated by it.
This weekend Scarlet and I are headed up to Washington for Today's Generation's first dance competition of the year. And while were gone, Jon is getting to work. First to go are the cottage cheese ceilings and the wood paneled walls. More pictures soon to come!
Posted by Kacey Nielsen at 7:44 AM 8 comments:

Where is she going now?

So after 2 1/2 years of free internet thanks to an open wireless signal from one of our gracious neighbors, we have been cut off. Yup, the guy added a password. So I have been stuck internet-less for the past 3 weeks. I have never felt so cut off from the world....

I am right now typing furiously on the library computer hoping I can get a few sentences down before Scarlet goes and finds another stranger. She has no qualms about leaving my side and finding whatever else looks more fun. It makes for some interesting experiences as I try to get things done while I jet around the library.

But a very quick update... yes we did buy a house and we are moving in two weeks from today YYYYEEEEAAAHHH! couldn't be more excited. pictures and details to come... whenever I get my internet back...

Everything else is good as usual. I am so sad I haven't been able to catch up on everyone else's blogs. I seriously feel the hole. I miss the blog world. Anyway, just wanted to make sure all knew we were still alive... just back in the stone age.
Posted by Kacey Nielsen at 10:49 AM 4 comments: