Some to Remember, Some to Forget

My mom and her dancers were headed to Seaside, OR this year right after the 4th of July.  Jon and I decided it wasn't in the cards for us this year.  It's no fun to miss out but sometimes things just don't work out.  Plus, being the only family member with children means that things get complicated when we come around.  I may have even envied the thought of their quiet, child-free, Seaside vacation.

But then my mom decided we needed to be there.  Jon couldn't go but we compiled some airline points and got flights for all of my children and myself.  I must have asked my mom, "Are you sure you really want us there?" about a hundred times.  When the tickets were officially booked, I remember saying, "Okay, but just remember.  You brought this upon yourself."

The trip started with getting all of my kids on a plane to Oregon.  Here's what people who have never traveled with young children on a plane don't get.  I always appreciate it when people compliment my children after a plane ride and tell me they traveled really well.  But the truth is, they didn't travel well, I did.  I was 'on' the whole time.  Taking care of every need, being well prepared with snacks and entertainment, endlessly bouncing and nursing a baby who really doesn't want to sleep while making sure the almost 3 year old doesn't totally lose it because we chose the show he didn't want to watch. Our plane had a layover in Sacramento so my children had to watch everyone leave the plane while I convinced them that we had to stay on just a little bit longer.   It's exhausting.

But Kylie was sweet enough to promptly pick us up with all of our luggage and drive us over to the temple where we met up with the rest of the crew.  We then hopped in the car and took off for Seaside.

And now that we are in Seaside, we'll start with the Good News:

This was our beach house.  It was really big, had a good toy collection for kids and had a ton of bedrooms.  The kids and I scored a room with one queen and two twin beds.  We were just a short walk away from the beach. 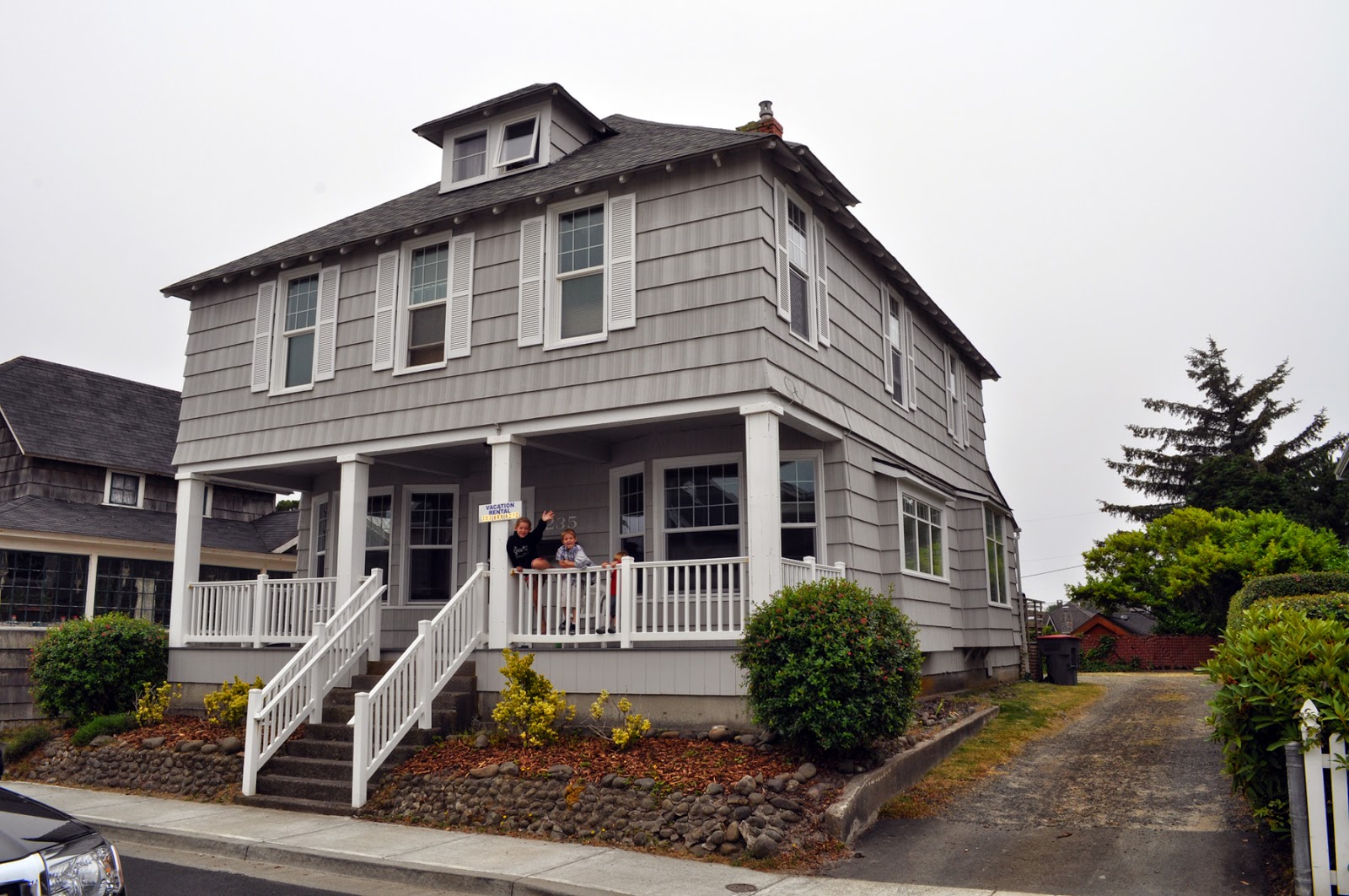 Asher's hair had reached it's longest length at this point and the salt water air gave it an adorable curly mop all week.  These pictures make me miss his hair a little... 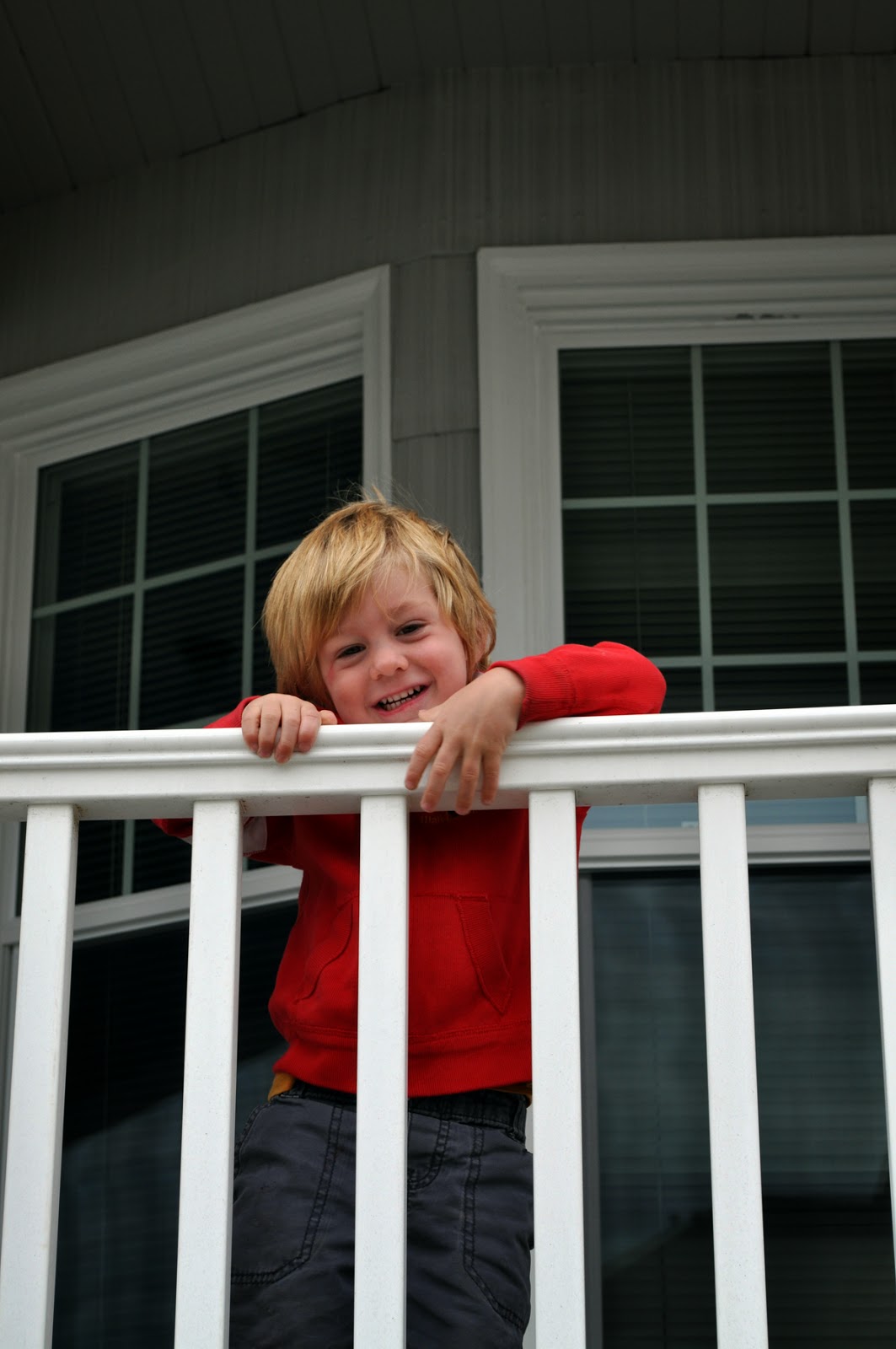 My kids were in heaven.  There was plenty of time to play and dig on the beach.  They got to search for sand dollars in the early morning light.  There was always an aunt or uncle to play with them or a Grandpa Dave to make them a treat. 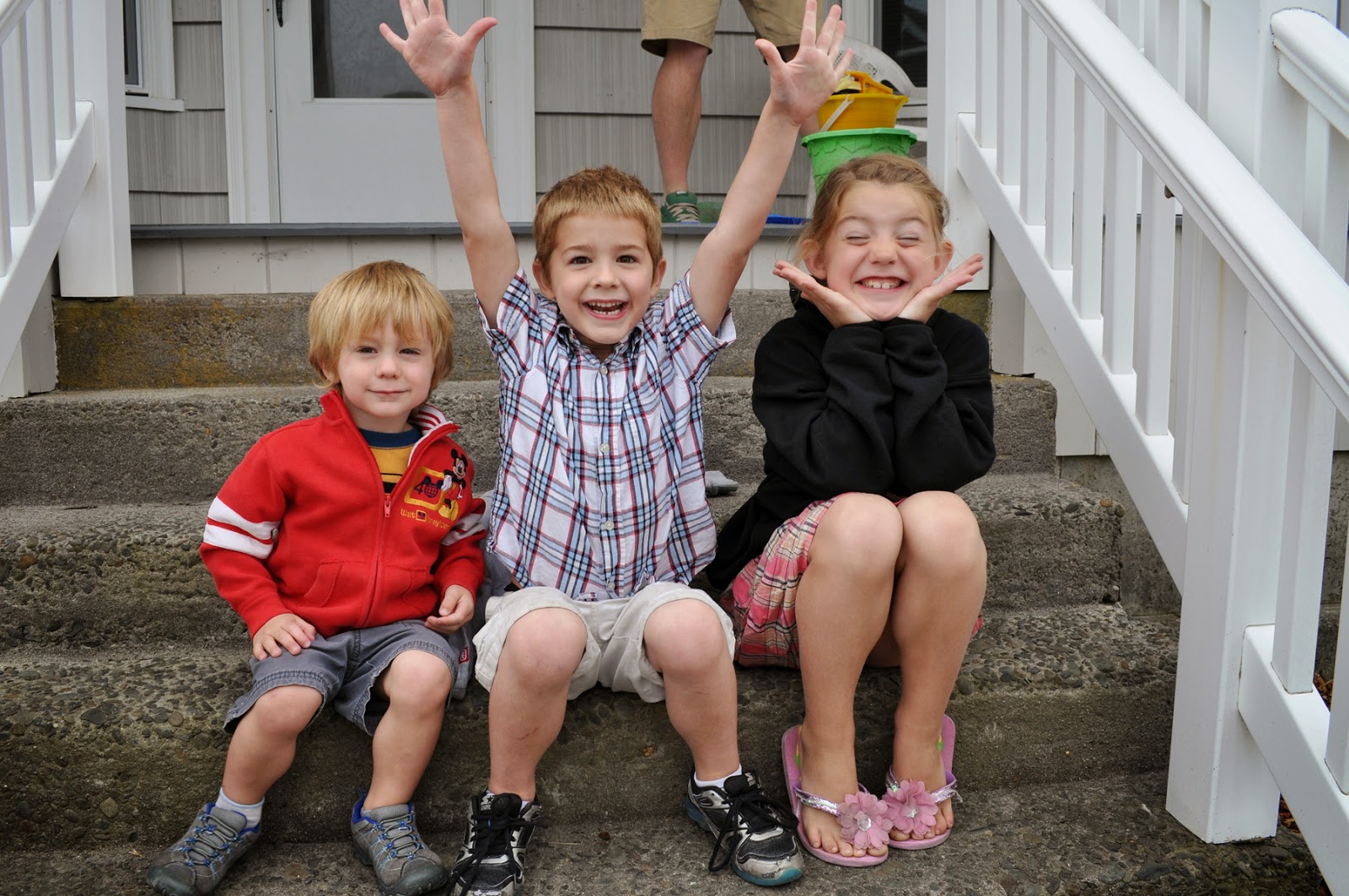 They even got into the ocean a few times.  That is some seriously cold water... 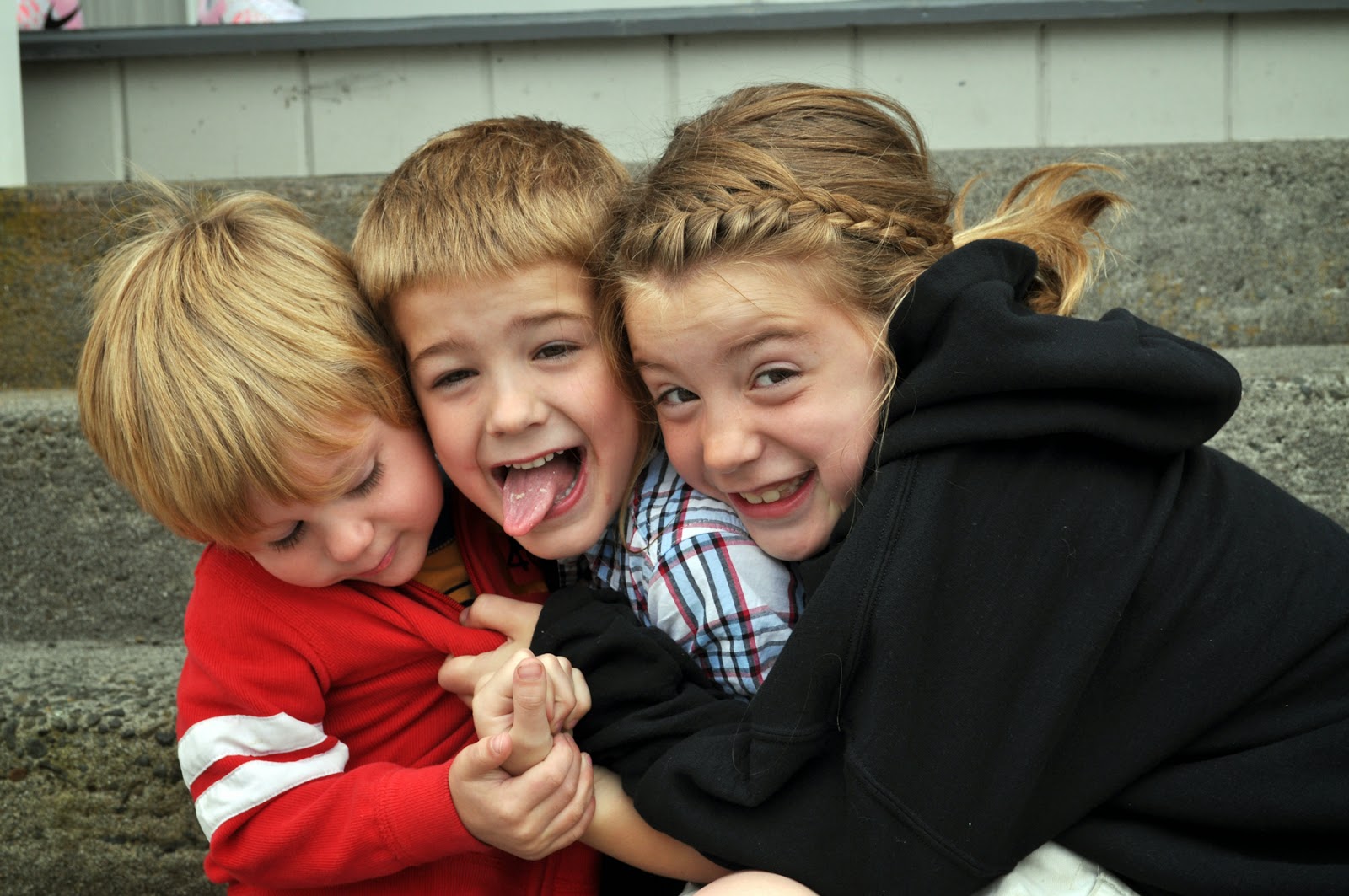 Jude loved the ocean too.  He ate a lot of sand.  I think his intestines were very well exfoliated during this trip.  His aunties were pretty disgusted but they still love him. 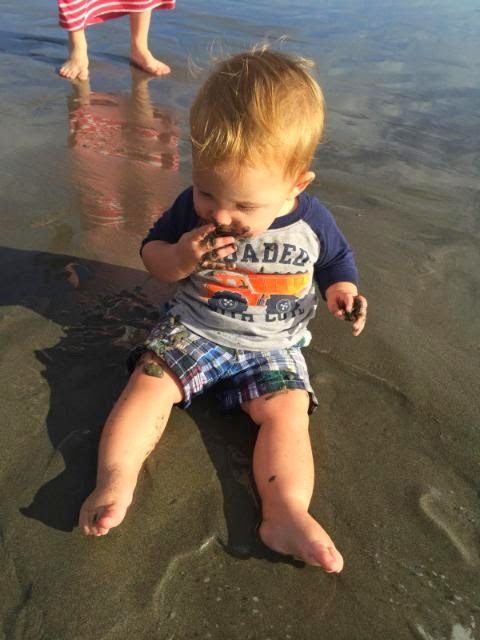 We rode the paddle boats and the water tricycle (somehow that photo disappeared...) 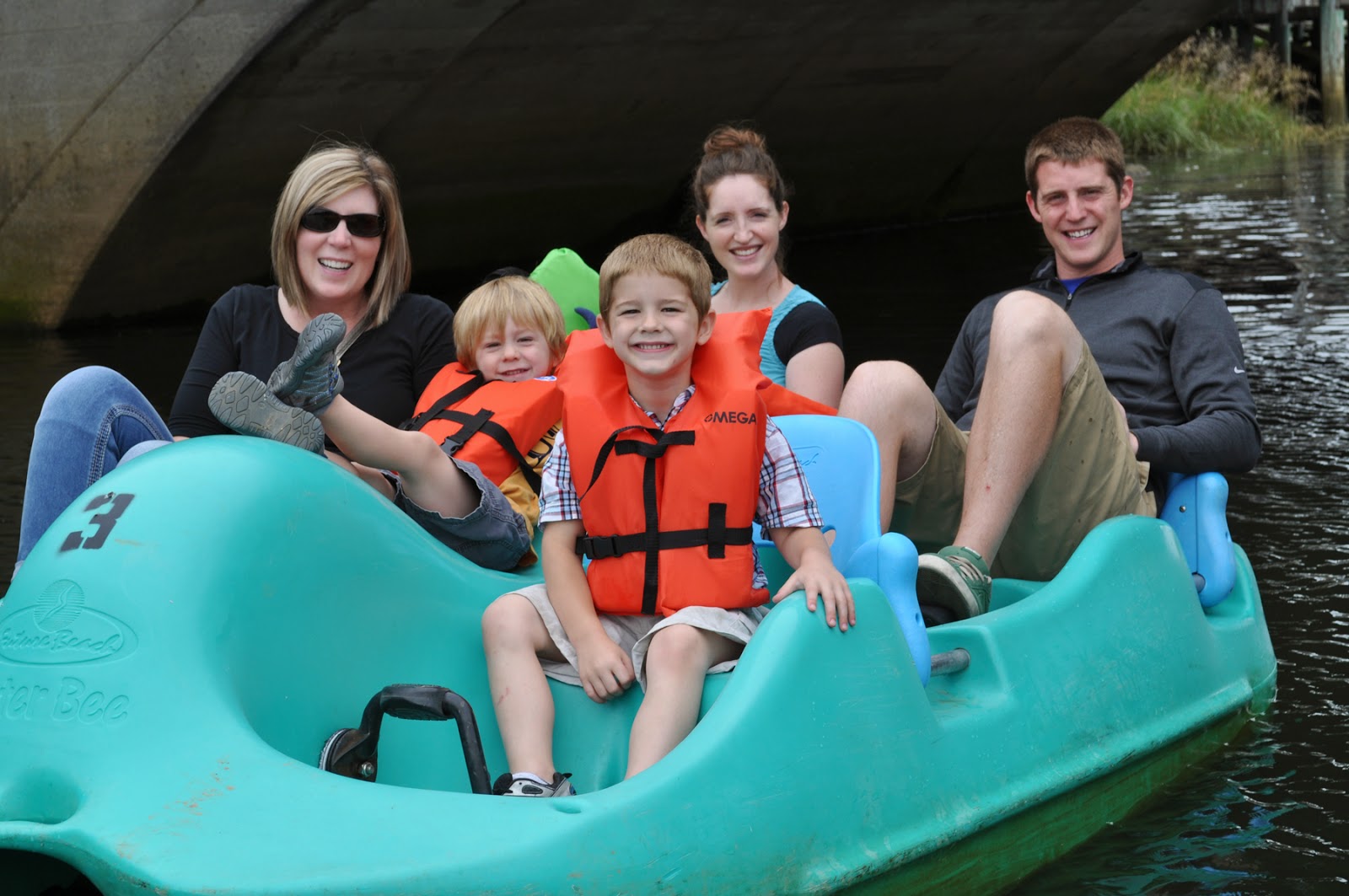 There were ridiculous amounts of taffy and fudge purchased.  They got to ride carousels.  If it was available to do, my kids got to do it.  They were happily spoiled all week long. 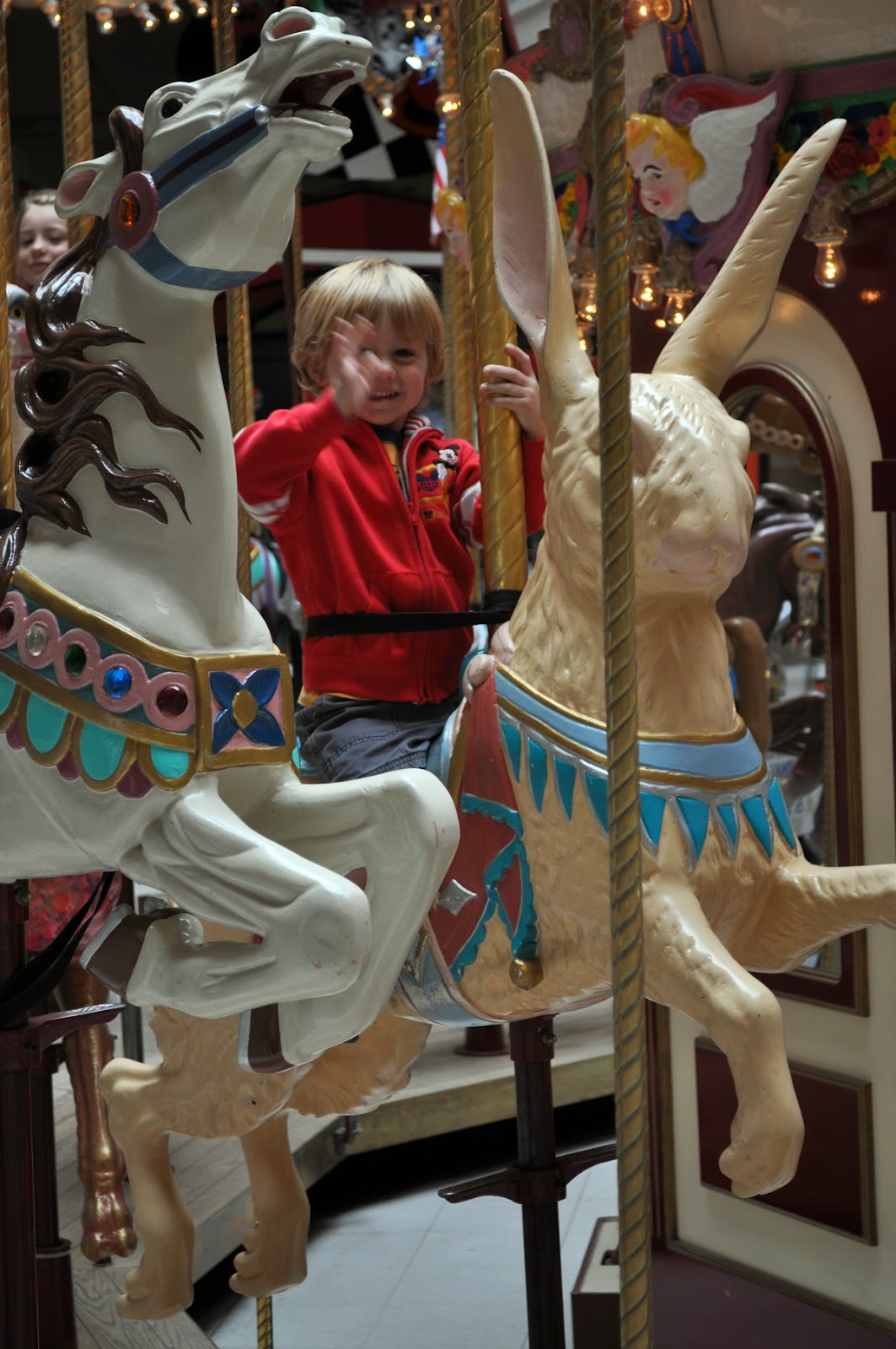 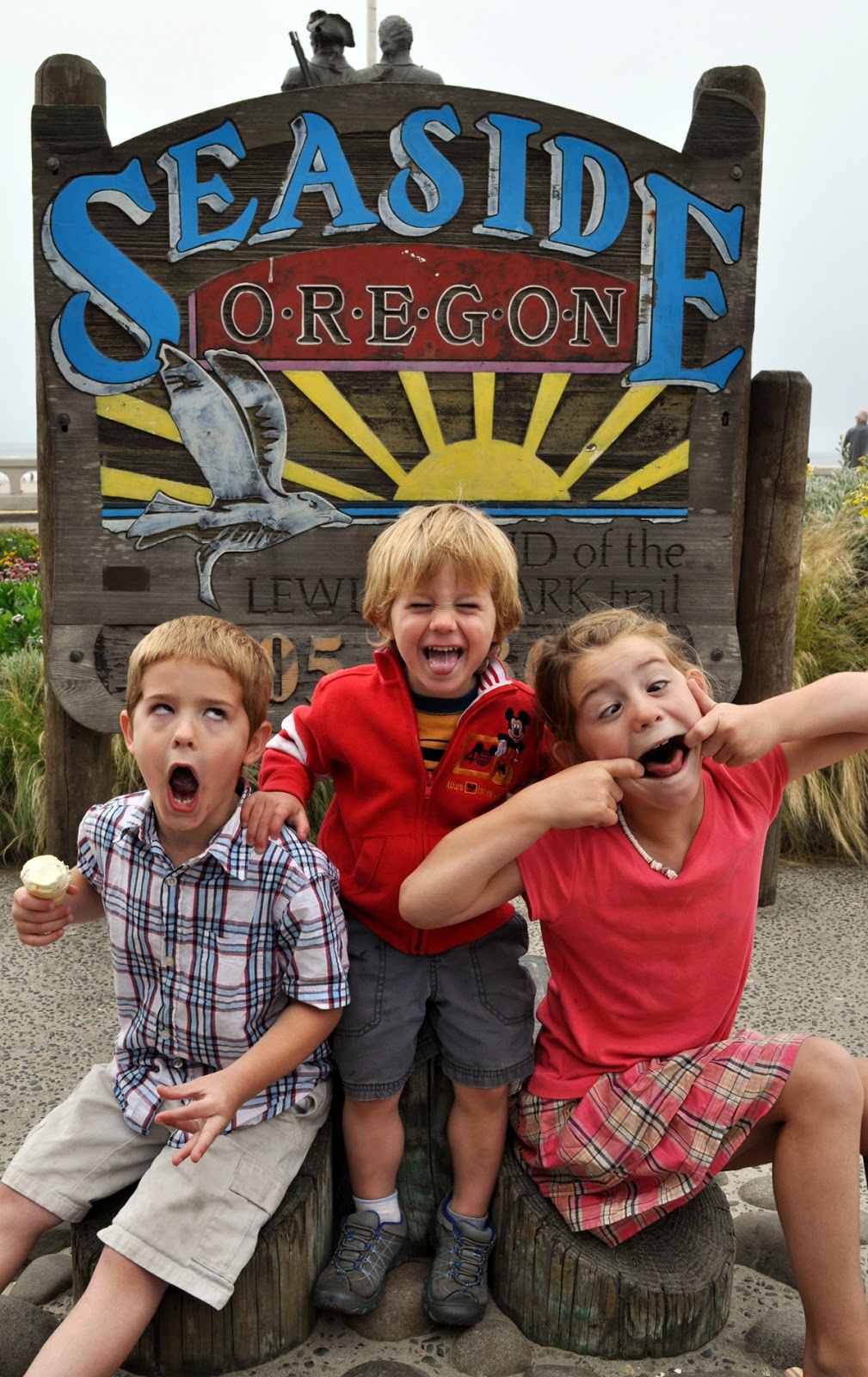 I had a lot of help with Jude.  This baby is just a whole lot of heavy but with Grandpa Dave and other helpers, Jude and my arms survived. 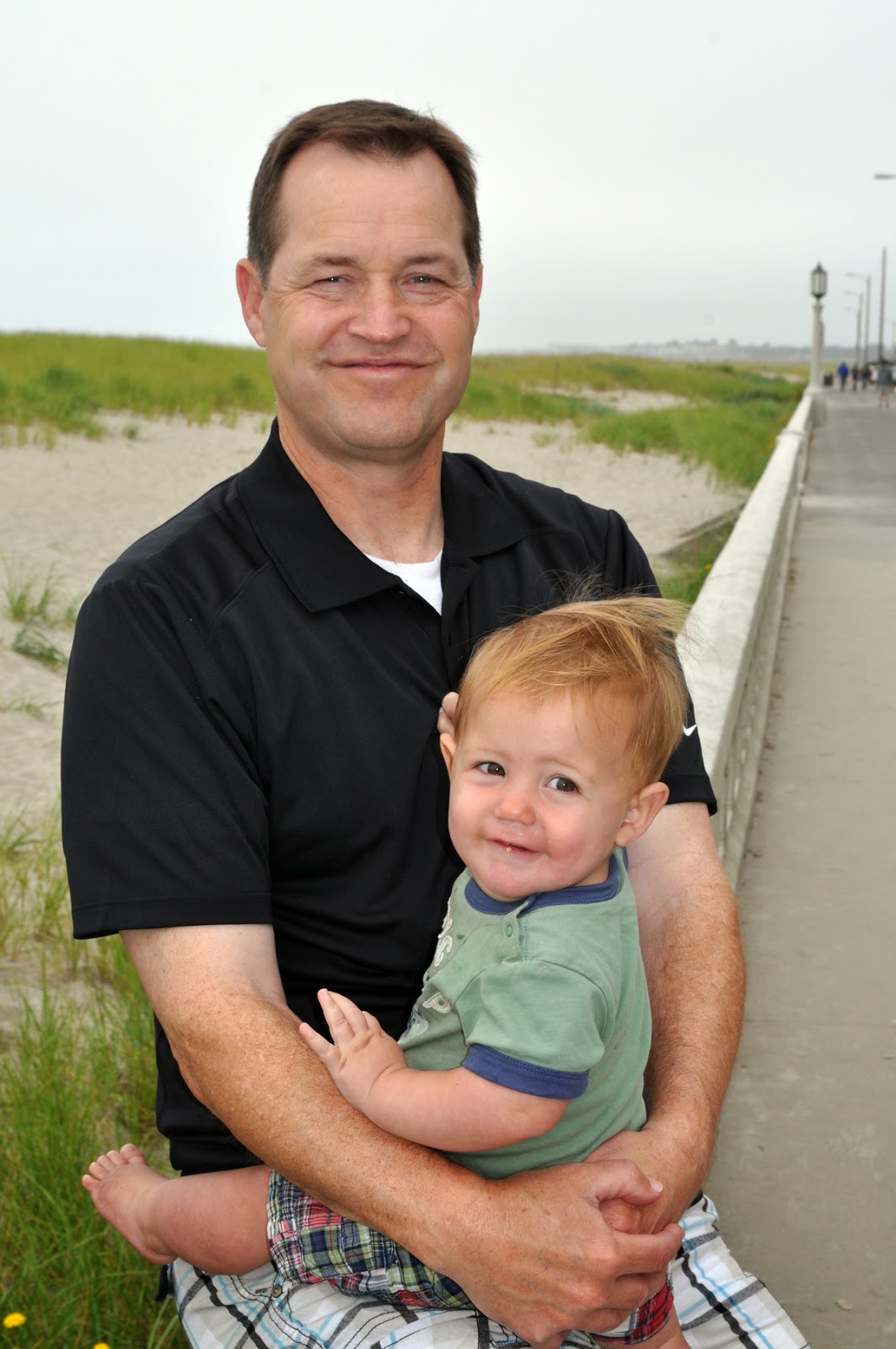 My kids really have a great grandpa. 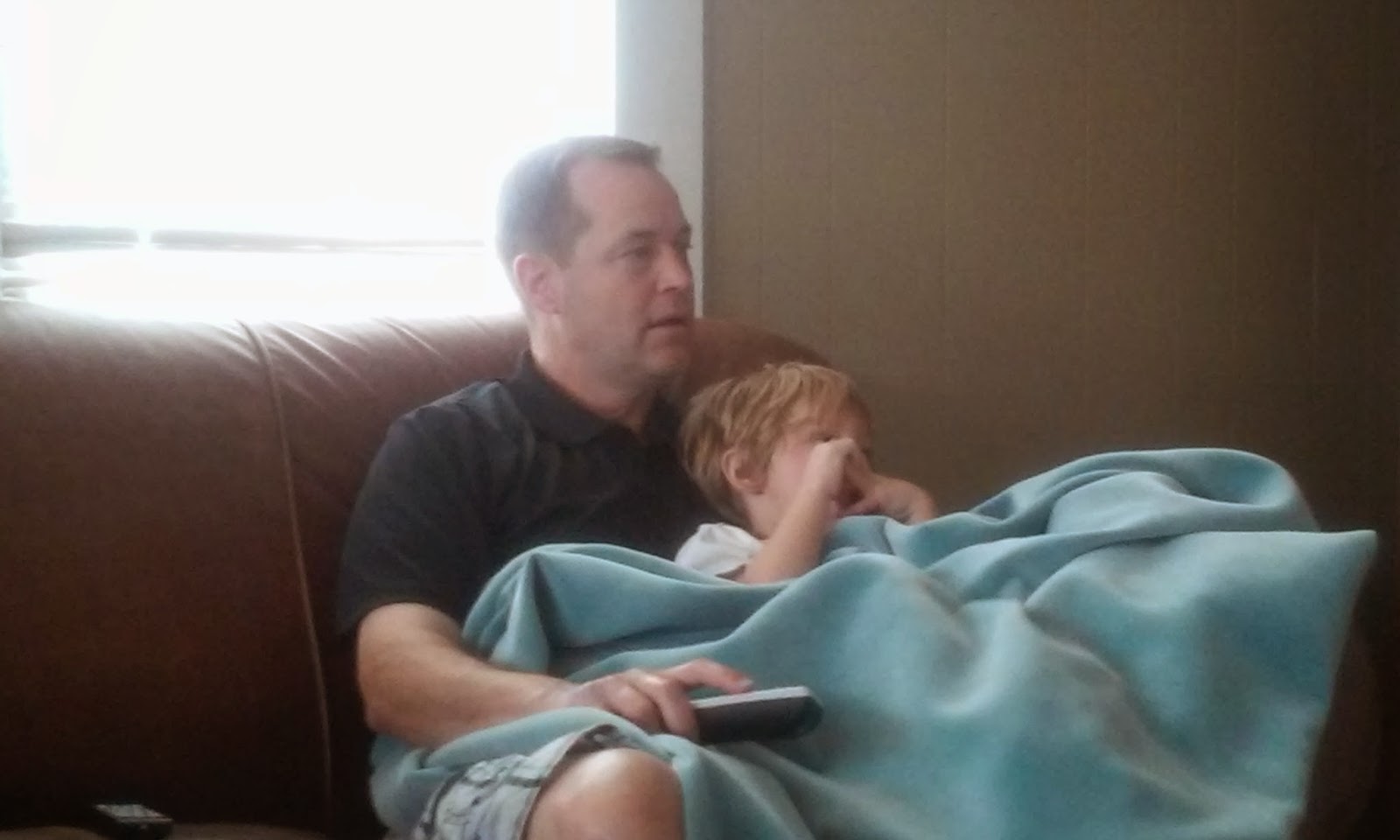 You'd think with only four grandchildren we could get a decent "shot with the grandparents"... 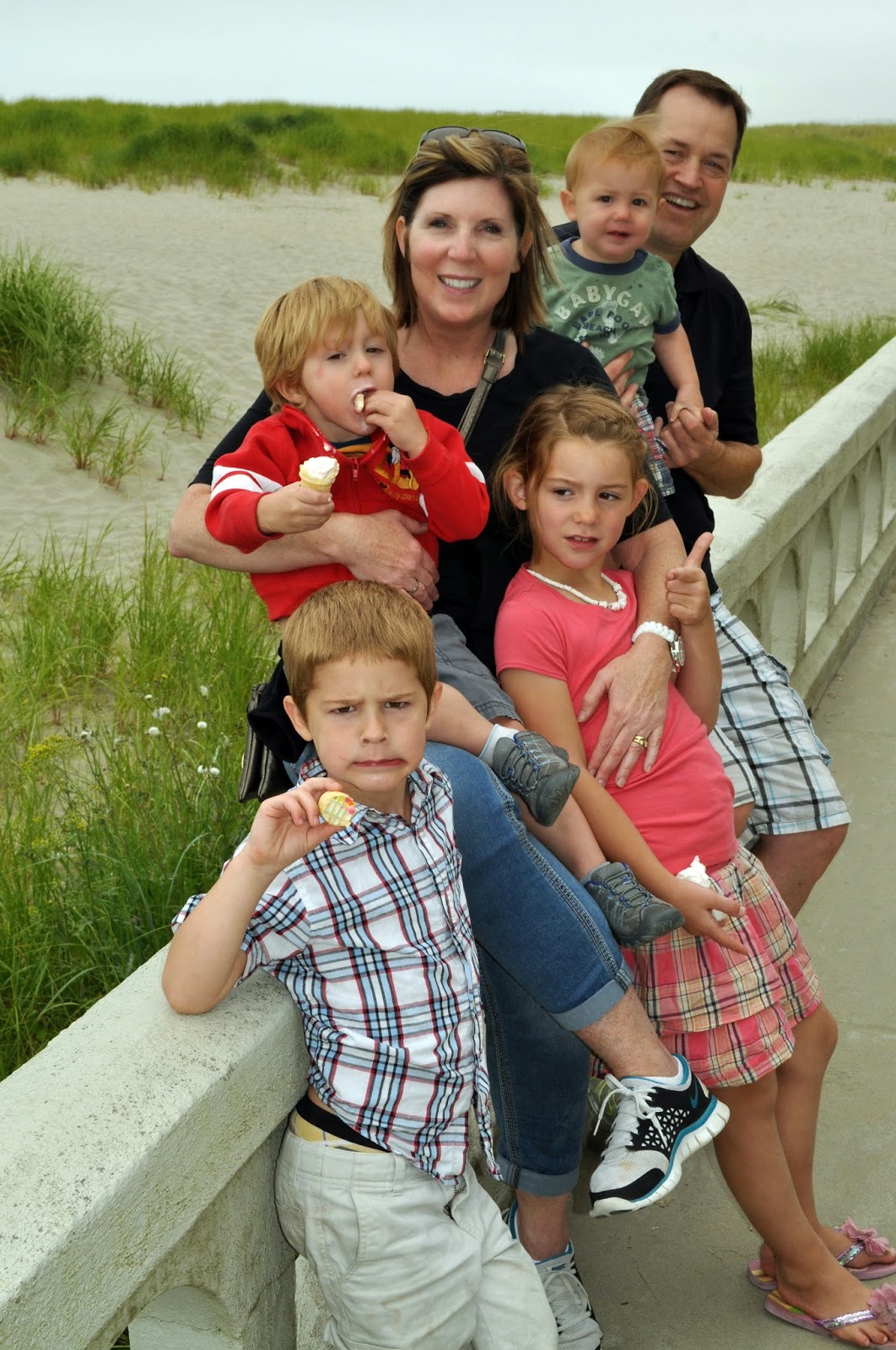 Asher even fell sound asleep while catching a ride on Uncle Brad's shoulders.  Brad found it mostly amusing until he felt a steady wet drip down the side of his head.  Gotta love a kid that can catch a nap anywhere. 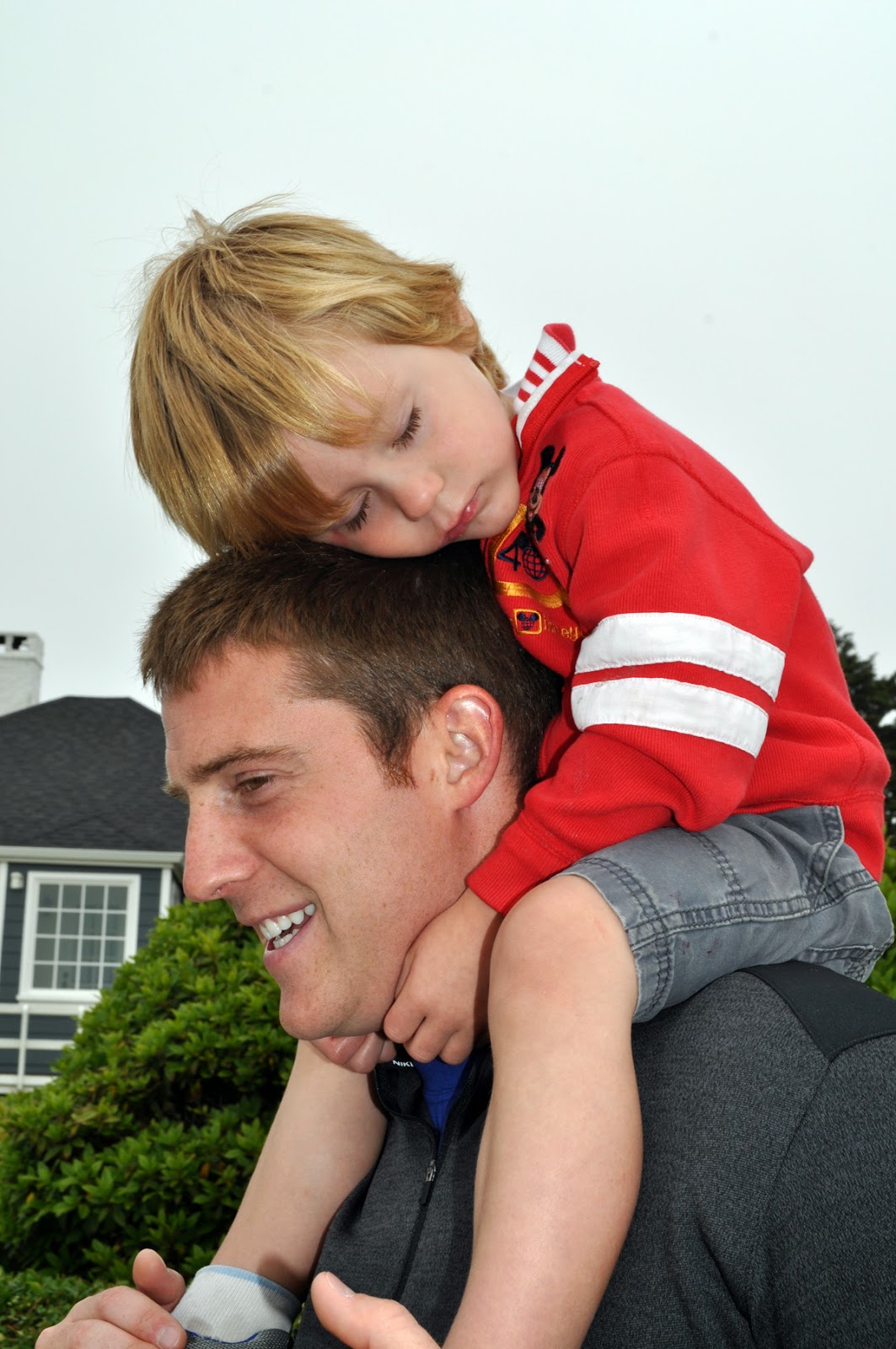 Brad was a frequent pillow for Asher. 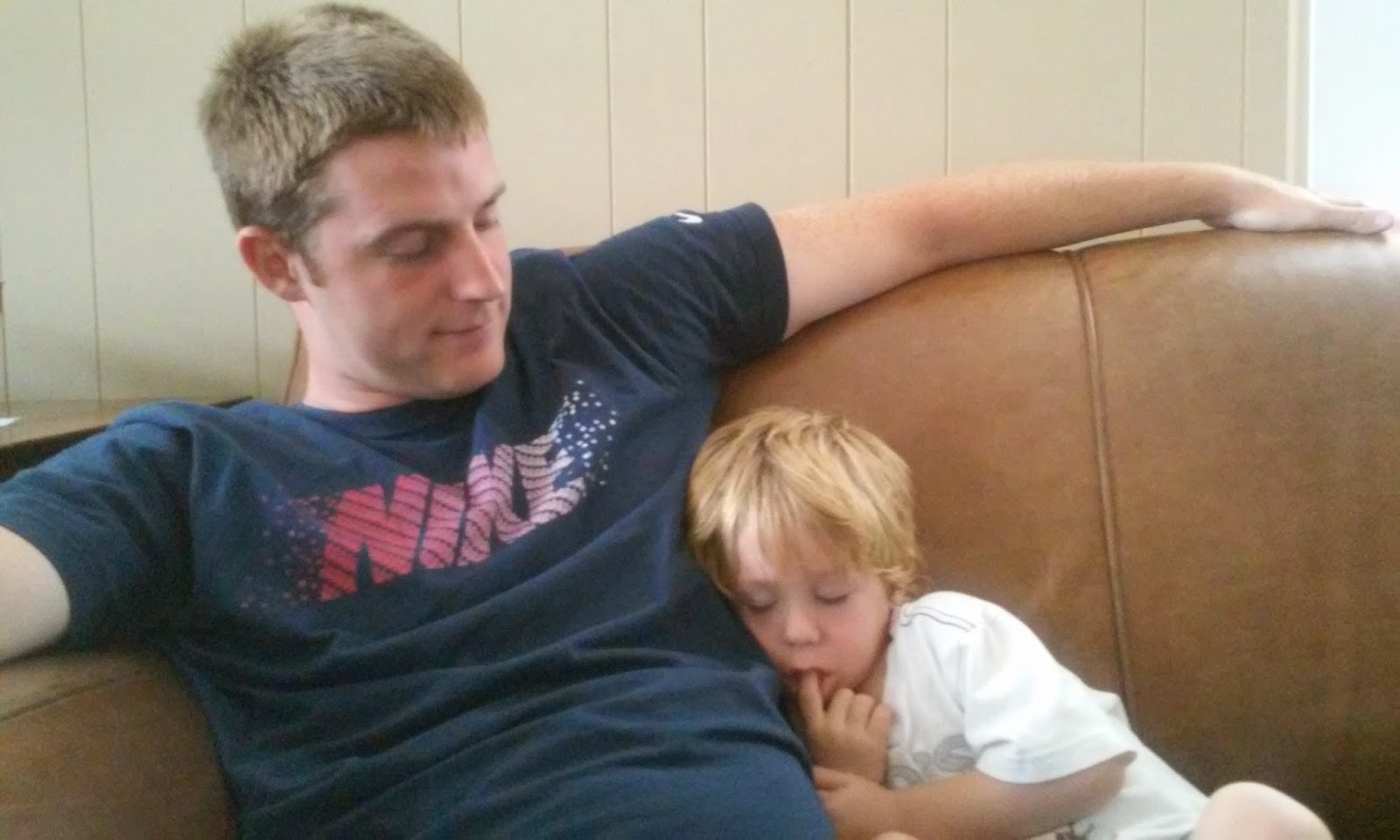 It is hard to tell in this smaller picture but close up, you can see where Jude gets his eye color from. 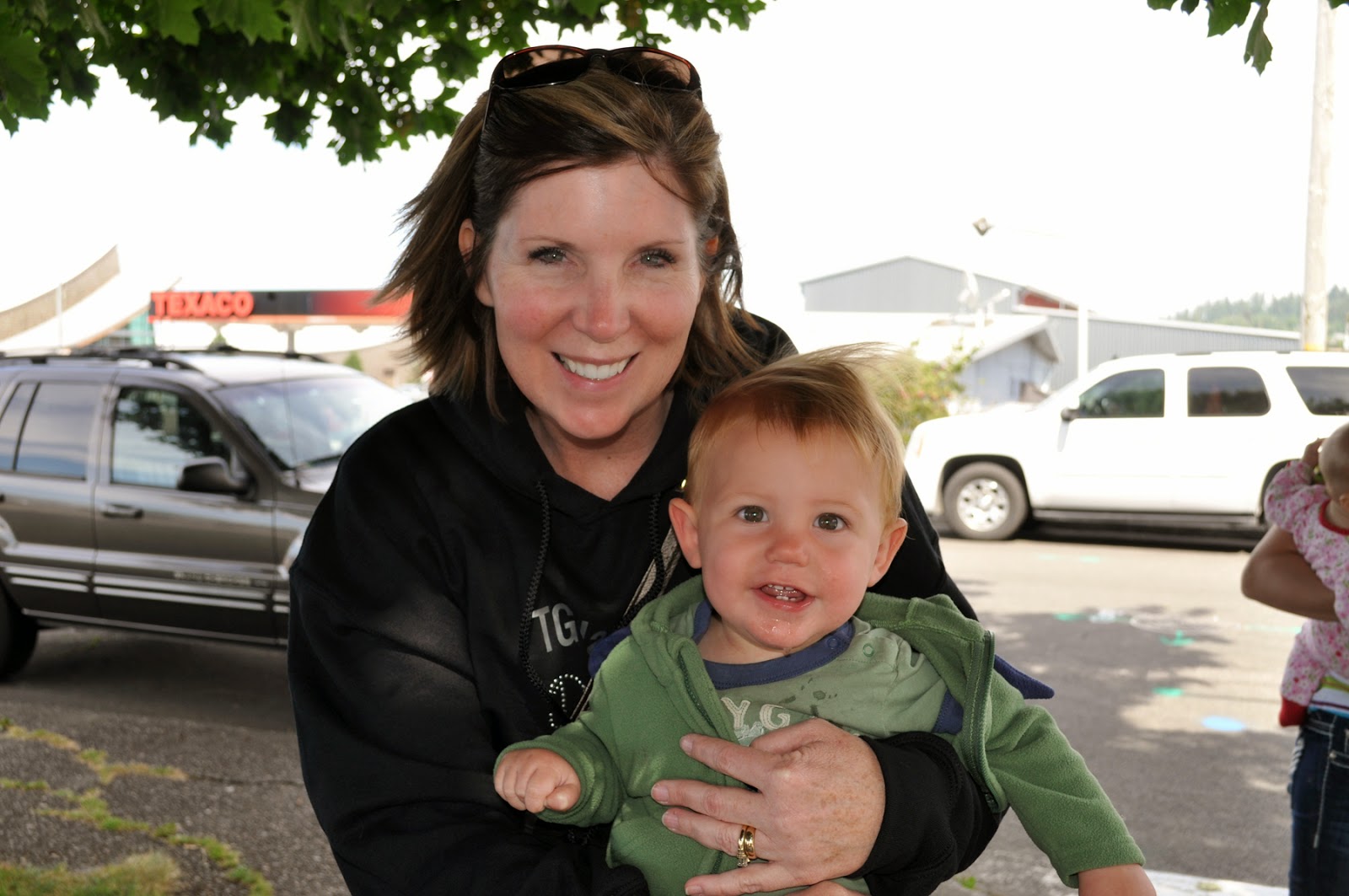 We took a trip to Astoria and tried their famous fish and chips after waiting in the "short line" for 45 minutes.  They were not the best fish and chips I had ever eaten but it was a fun adventure. 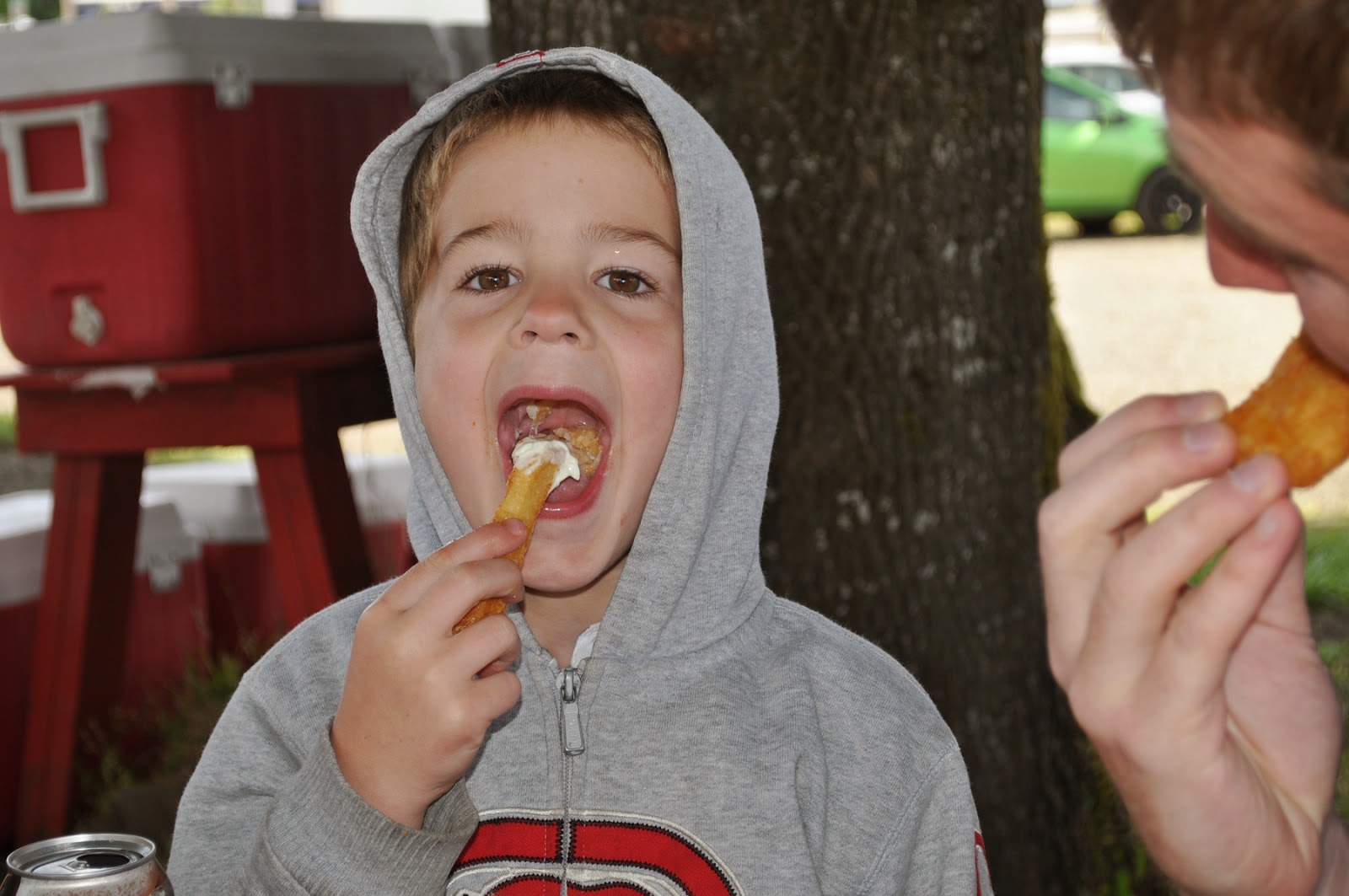 This tower was a fun little side trip.  We took little gliders to the top of this winding staircase and launched them into the woods. 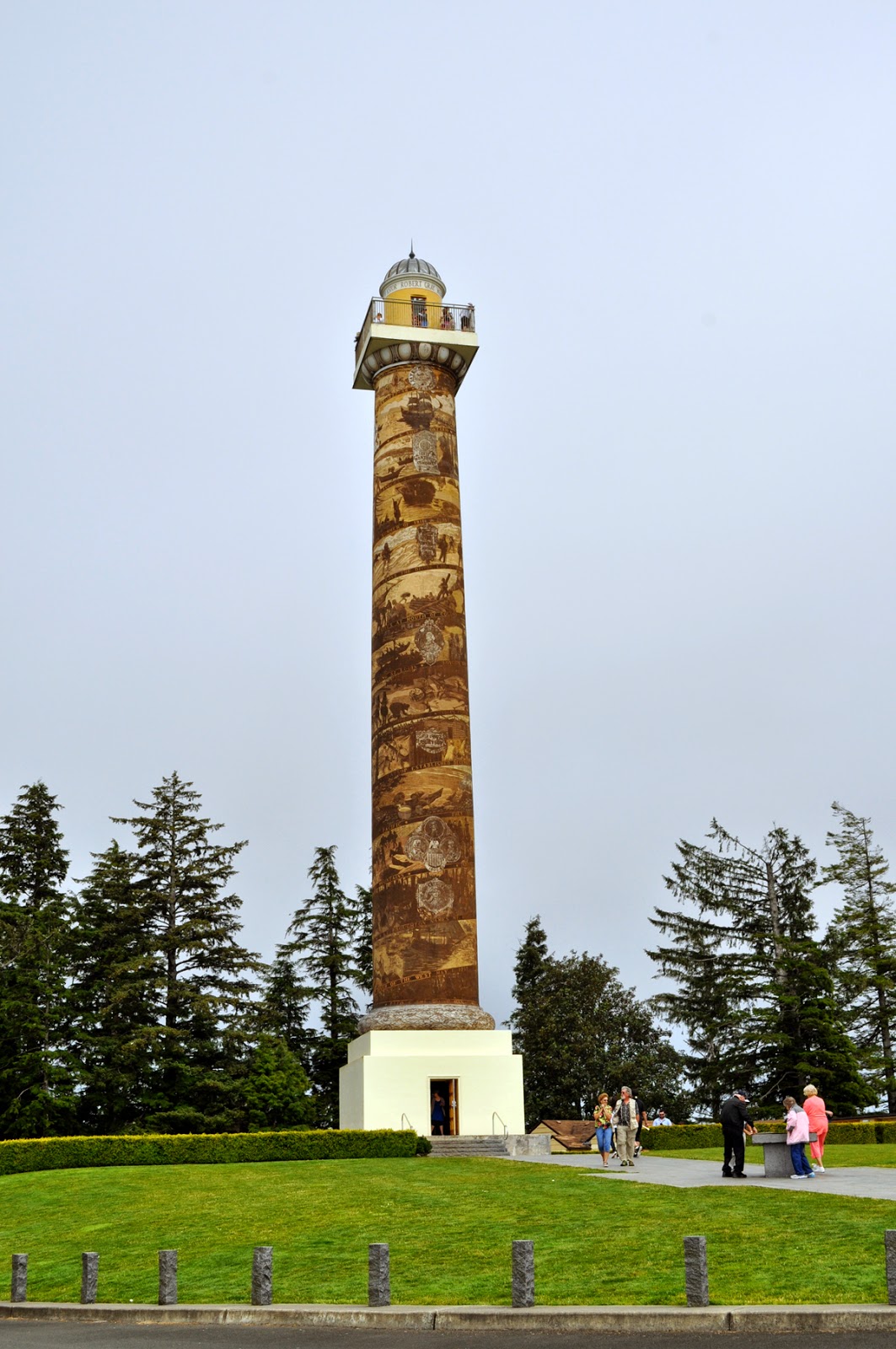 One thing I learned about my children, they are not naturally gifted in the art of glider throwing. 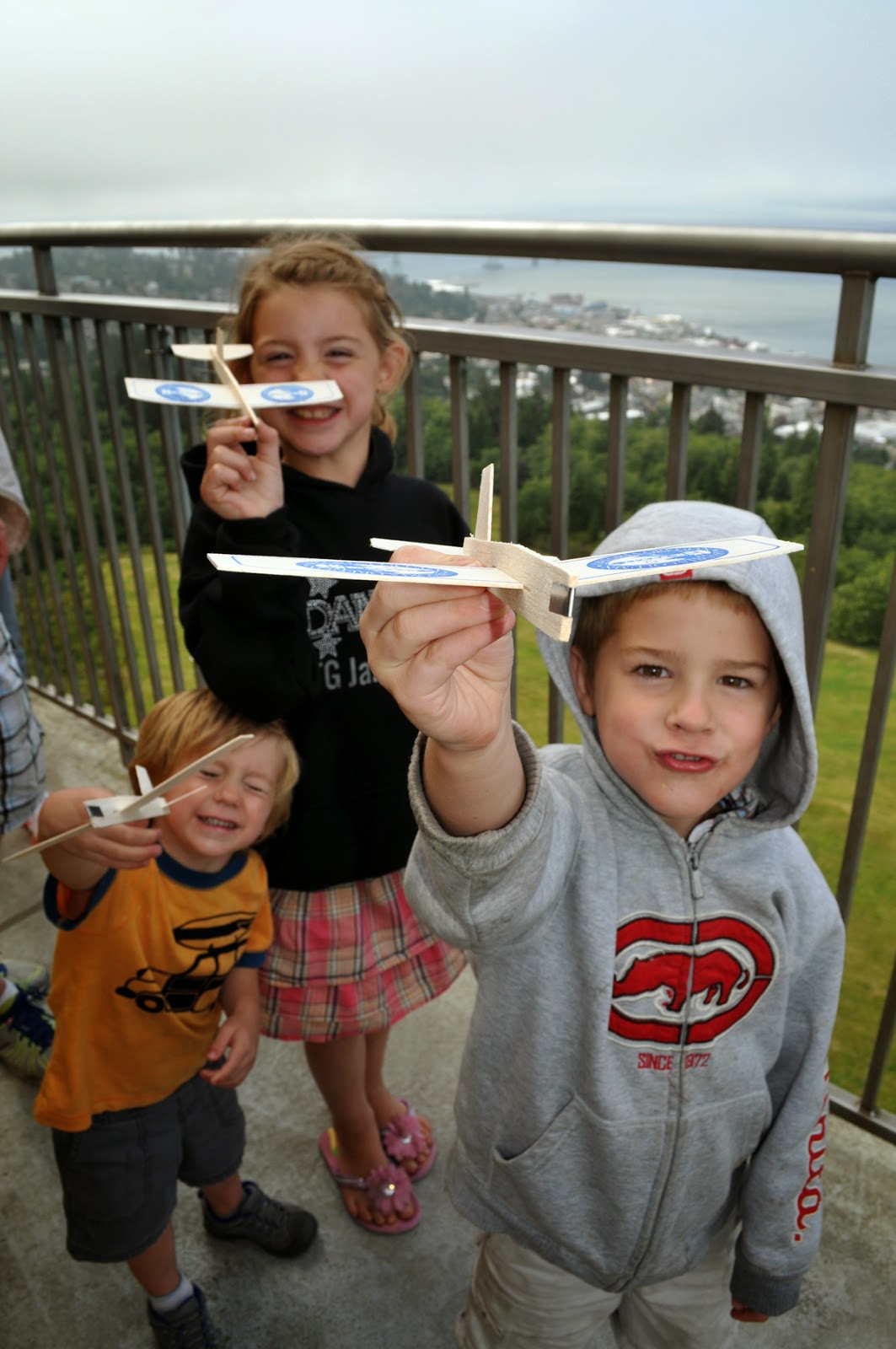 The view was incredible though 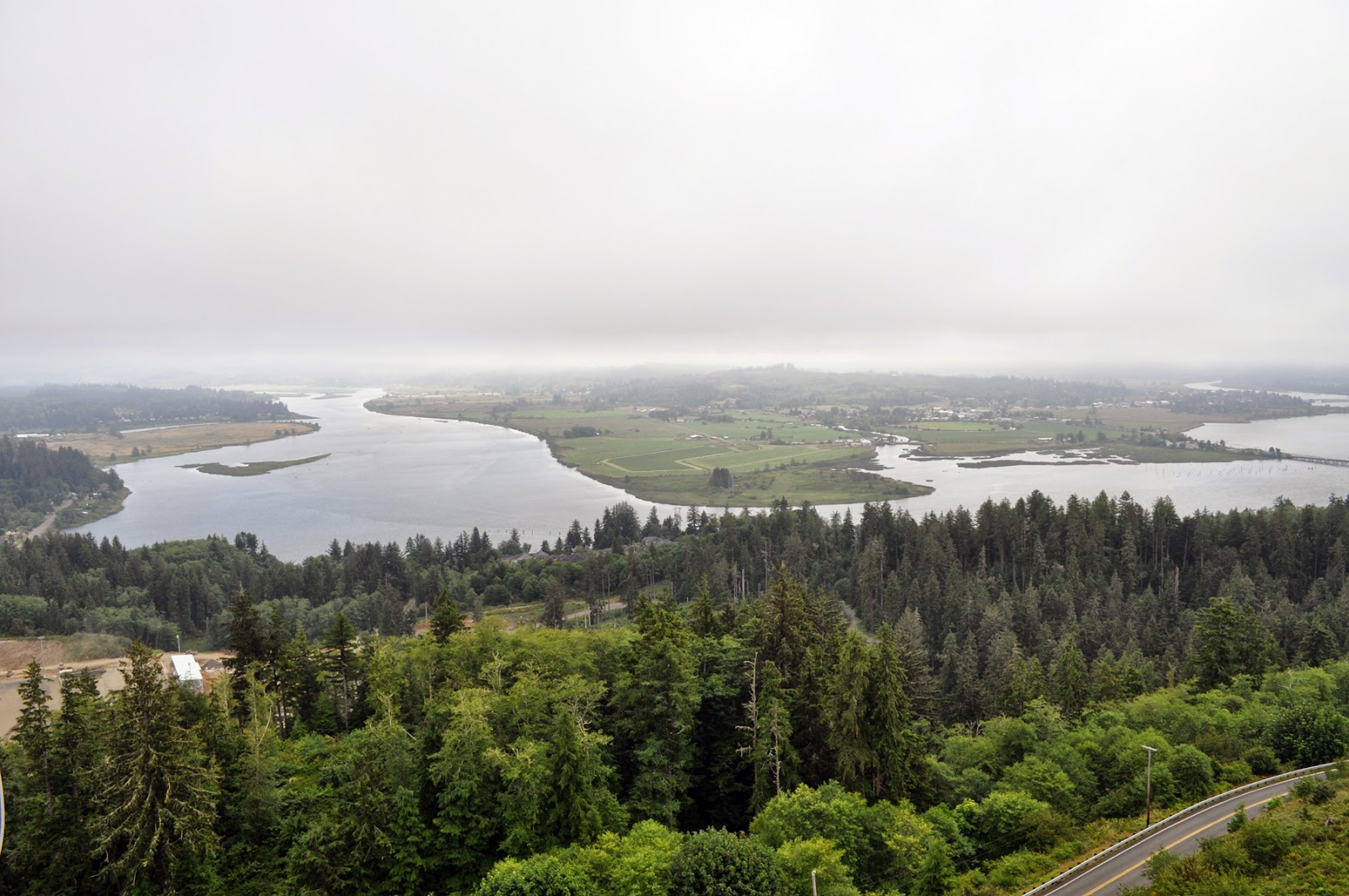 We found their planes after going back down and they practiced throwing them down this little field.  They got better.  Jude and I cuddled. 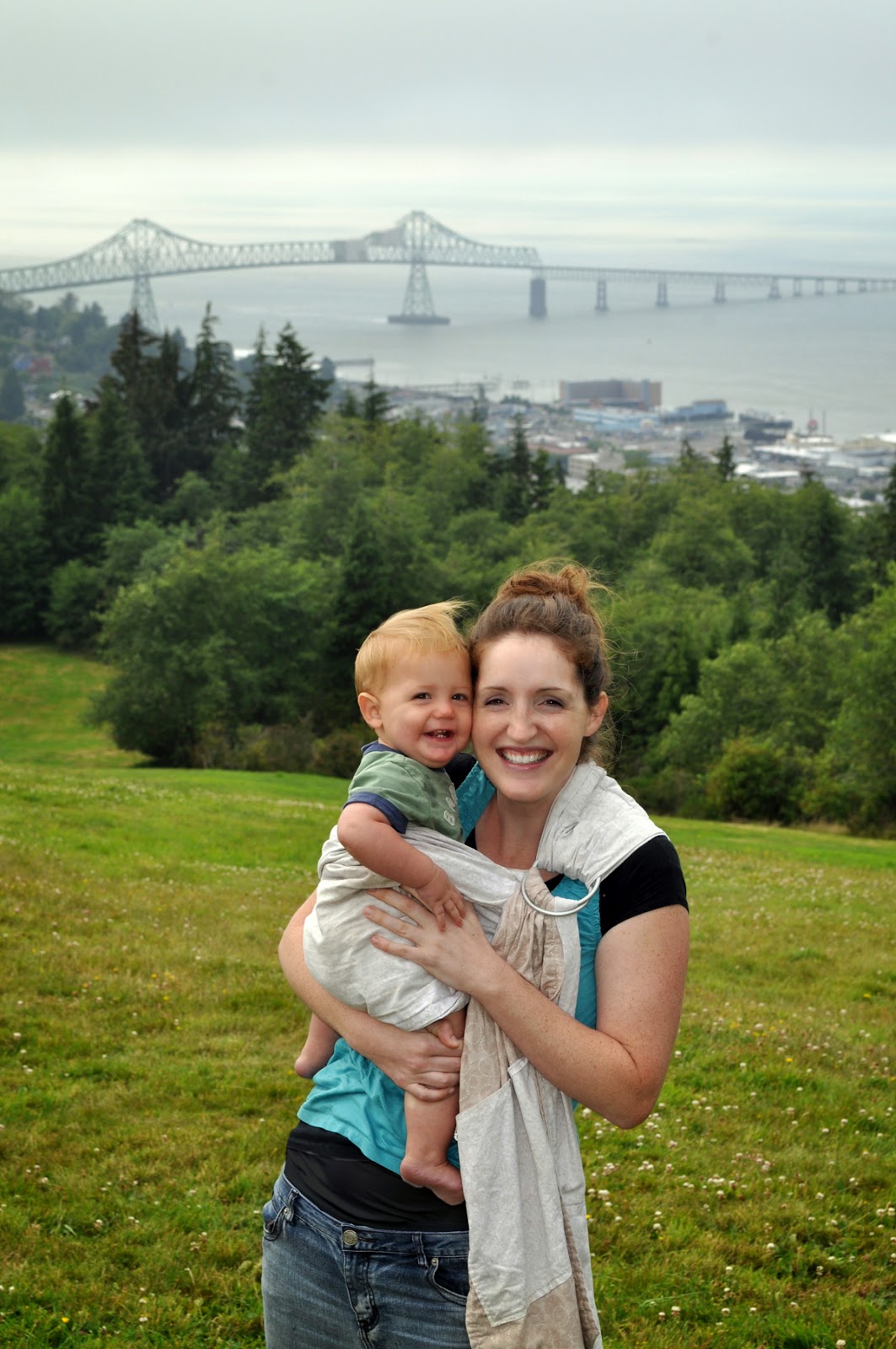 We got to head out to haystack rock and see the tidepools.  It was beautiful.  Have I mentioned how awesome it was to be cold the whole time?  It was a good 65 - 70 degrees the whole time we were there and I just basked in the cool, wet air.  It was a heavenly break from the desert. 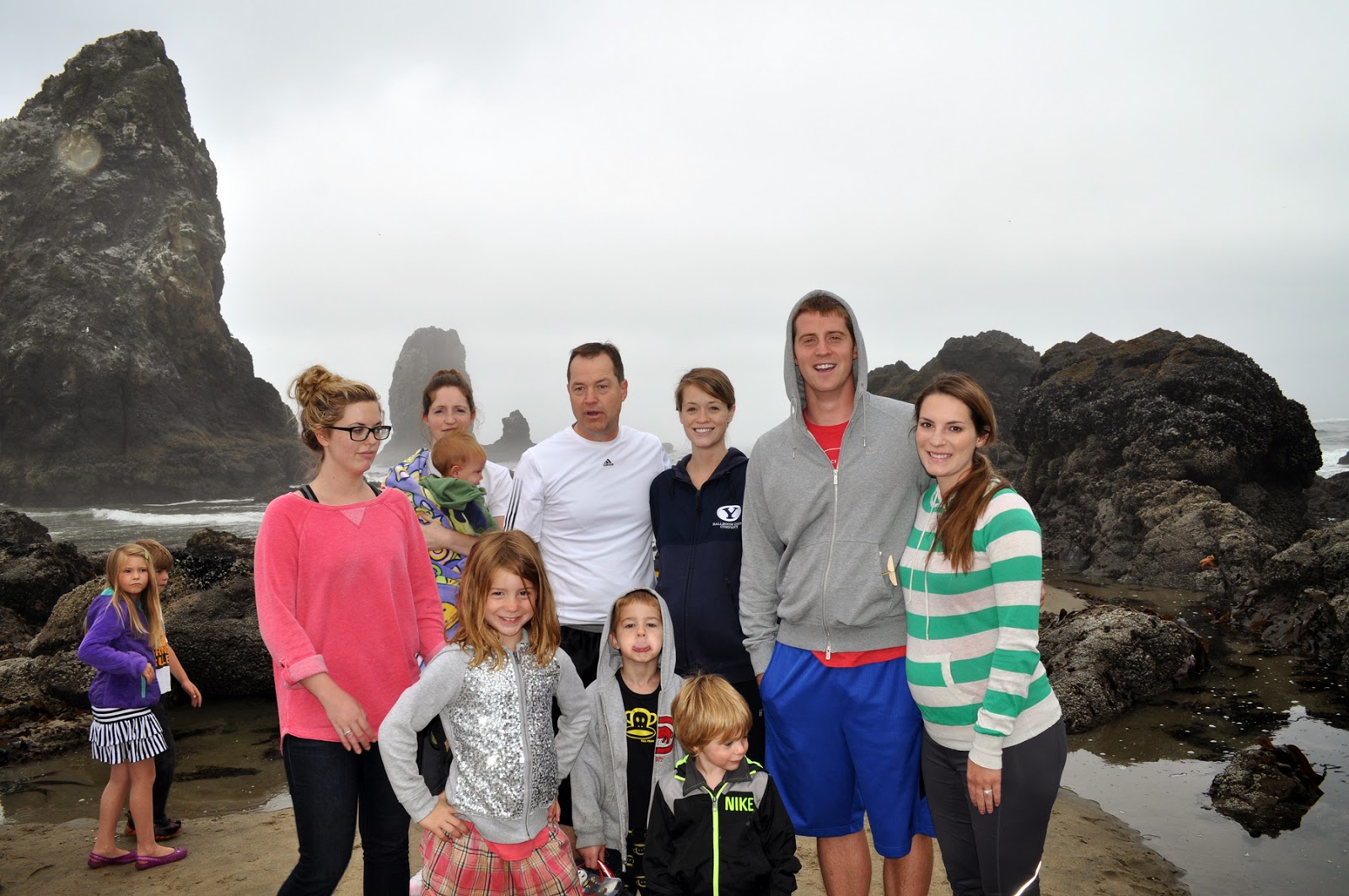 And after finding a quiet little tennis court, we hit it up on multiple occasions. 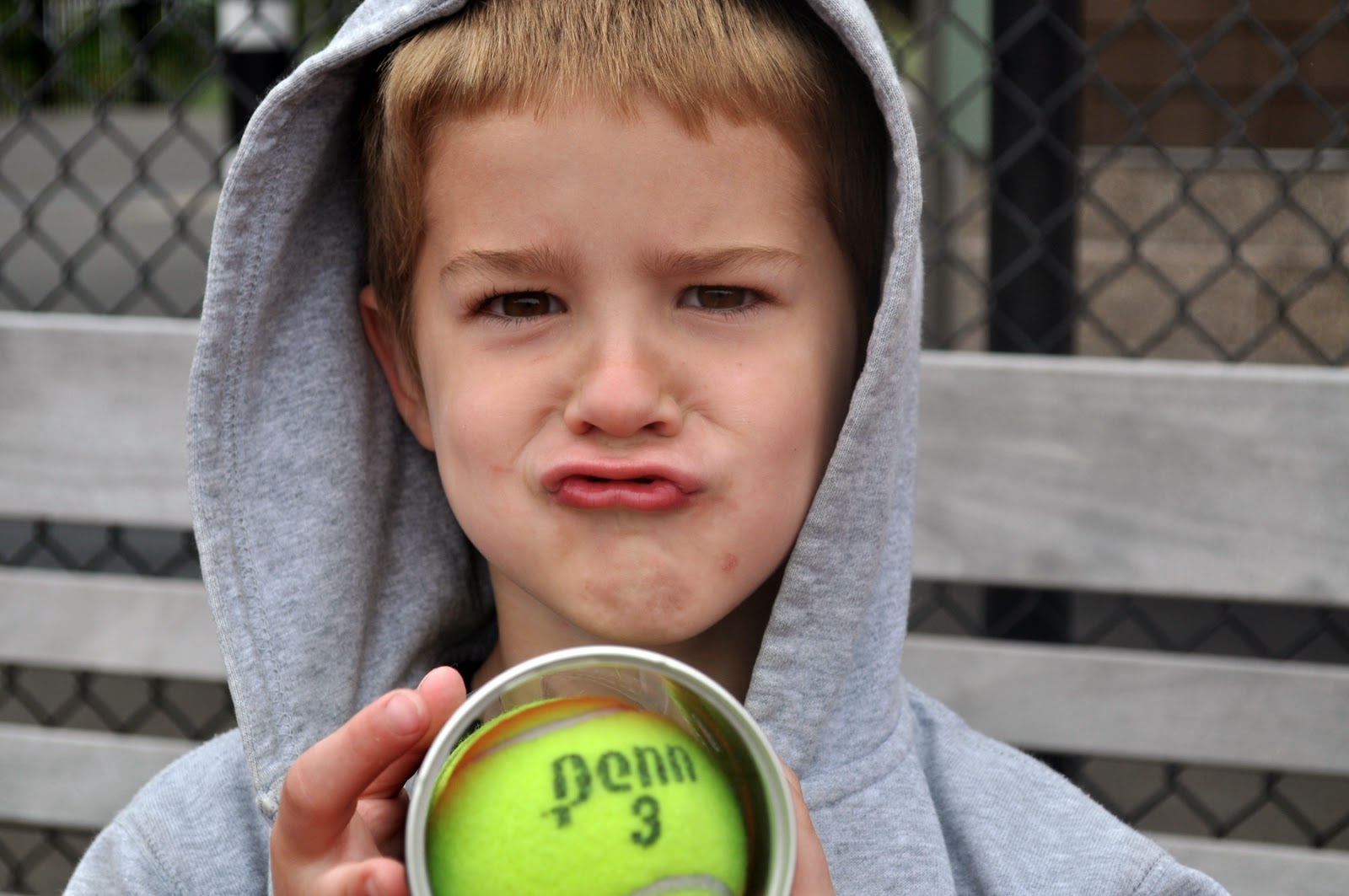 Even the pregnant ladies got their swing on. 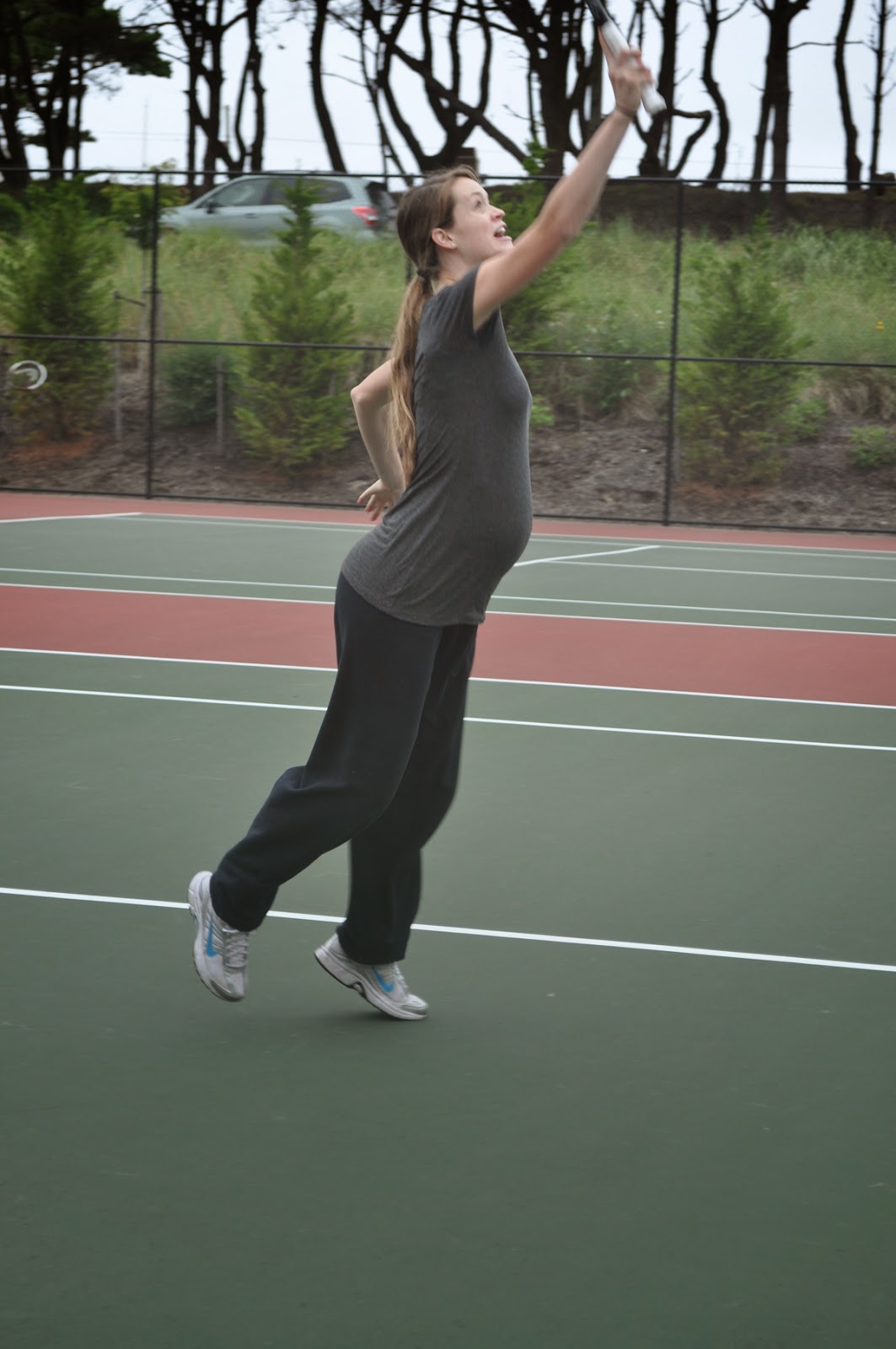 And Asher did crazy things like purse stealing.  We also had fantastically funny rounds of Awkward Family Photos, said goodbye to my brother Bryan who left for the MTC and ate a ton of very delicious Costco food. 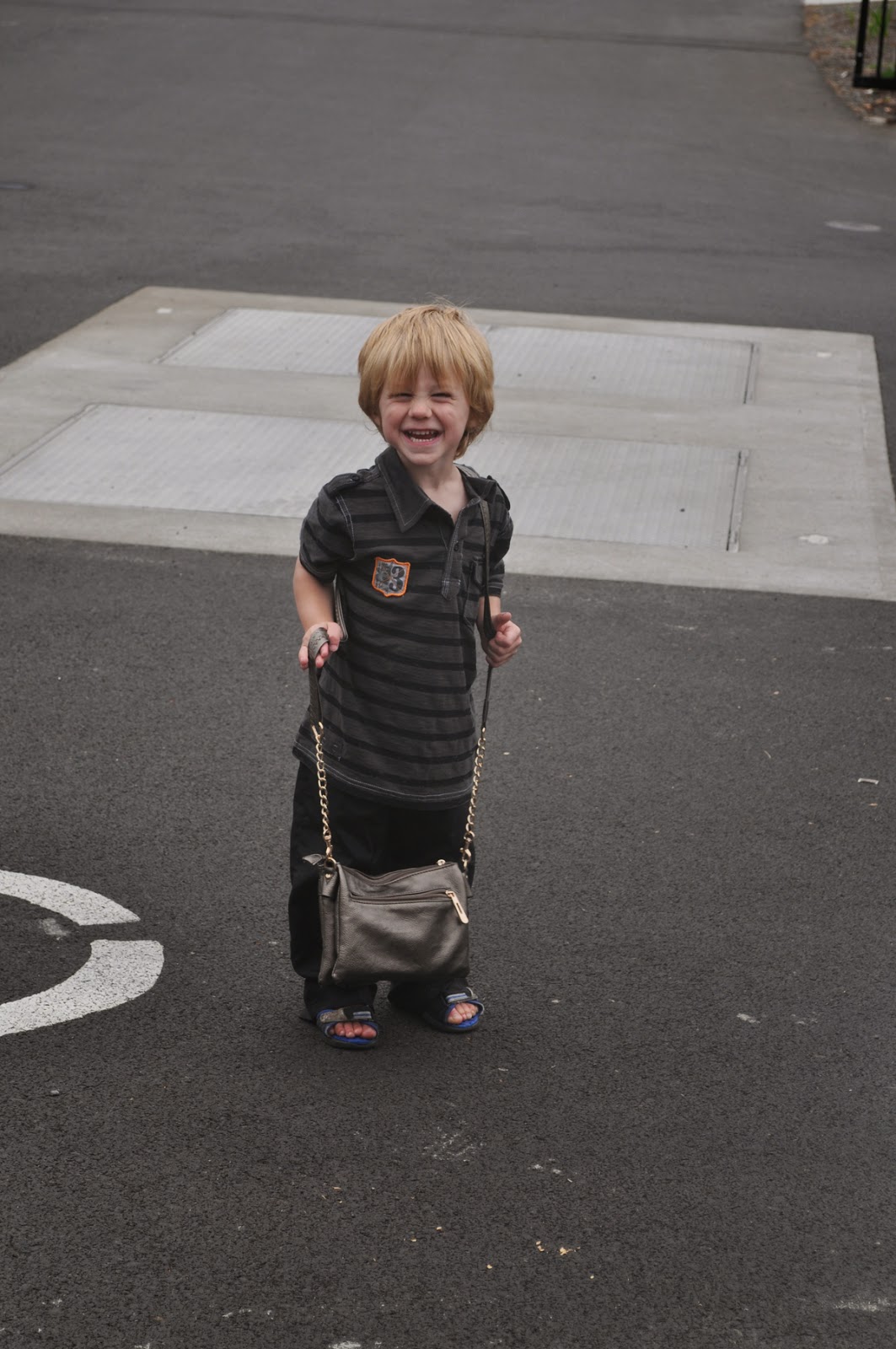 And then there was the Bad Parts:

Thankfully no pictures of this part.  Nothing anyone would want to see.  We arrived on a Saturday and on Sunday, Rhode had developed the stomach flu.  Is there anything worse than the omen of a stomach flu case on the first day of a vacation?  He seemed to get over it pretty quickly so we hoped it was just a bad reaction to something he ate.  We even took him with us to the Tillamook Cheese Factory because he had been fine for so long.  But he threw up in the car on the way there all over his clothes.  Poor guy.

Everyone seemed to be fine on Monday so we all relaxed a little.  That night I started feeling a little feverish and I thought I might be getting mastitis again.  Then the vomiting started.  I felt horrible for at least 24 hours.  Even though it is no fun being sick on vacation, it was so nice to be able to nap and relax when I needed it most.  My sisters really stepped it up and took care of my kids for me.

And after me, everyone else seemed to be okay.  But not for long.  We then got Courtney, Kylie, Jules and Asher sick.  Asher's started with a ride on a surrey, which is basically an 8 person gondola style bicycle.  Asher was riding up front with Jude and we had been going for a long time.  But all of a sudden Asher started crying.  Before we could even ask what was wrong, he threw up all over the front of the bike.  We had to pedal all the way back to the house, clean off the bike and then send two people to ride it back to the shop while the rest of us took care of Asher.

Luckily, by the time we were leaving, it seemed like the bug had ran its course.  Scarlet and Jude never good sick, thank goodness.  We had to be at the airport early because of driving schedules and I was not looking forward to it. But thank you Portland for having a kid friendly airport.  We found playplace right next to our gate. 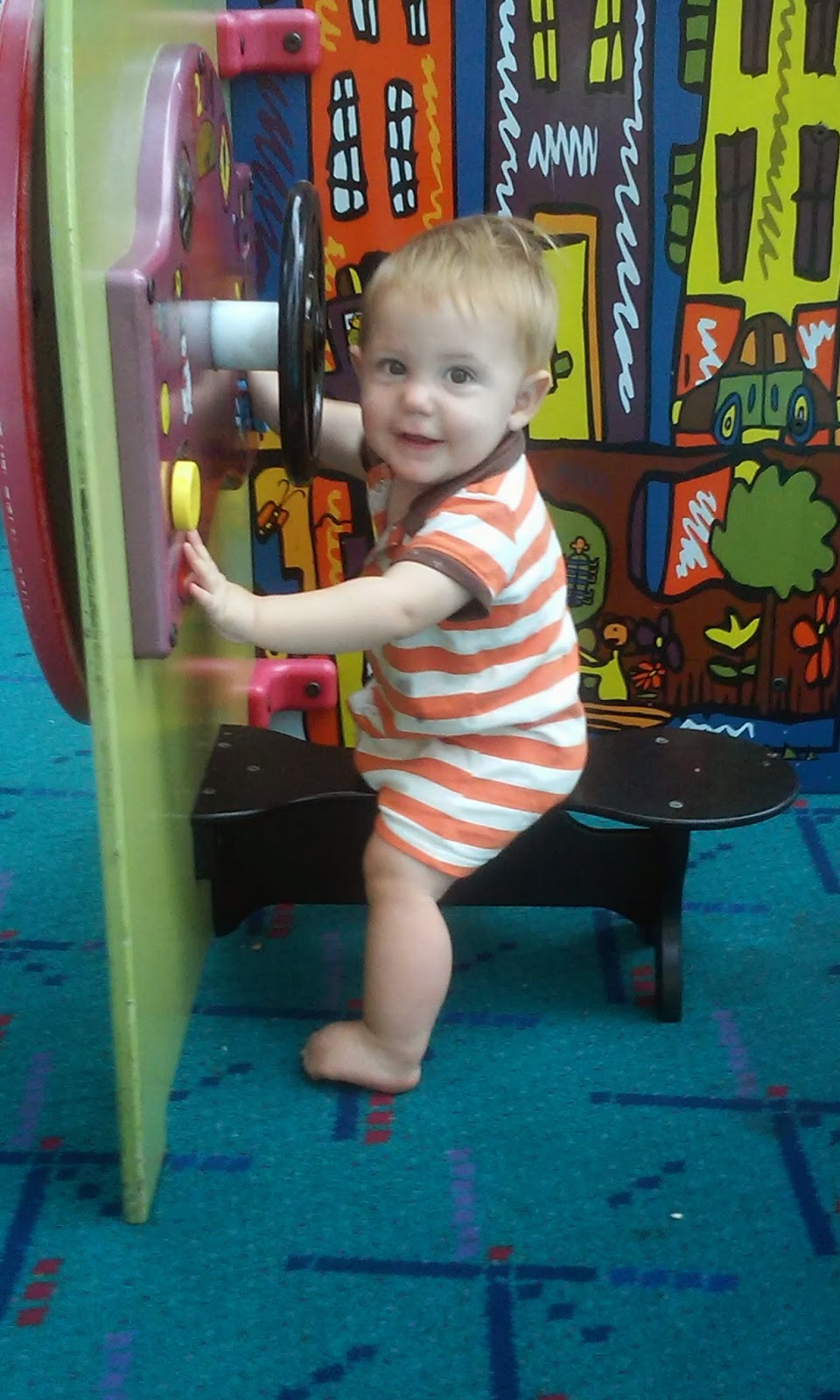 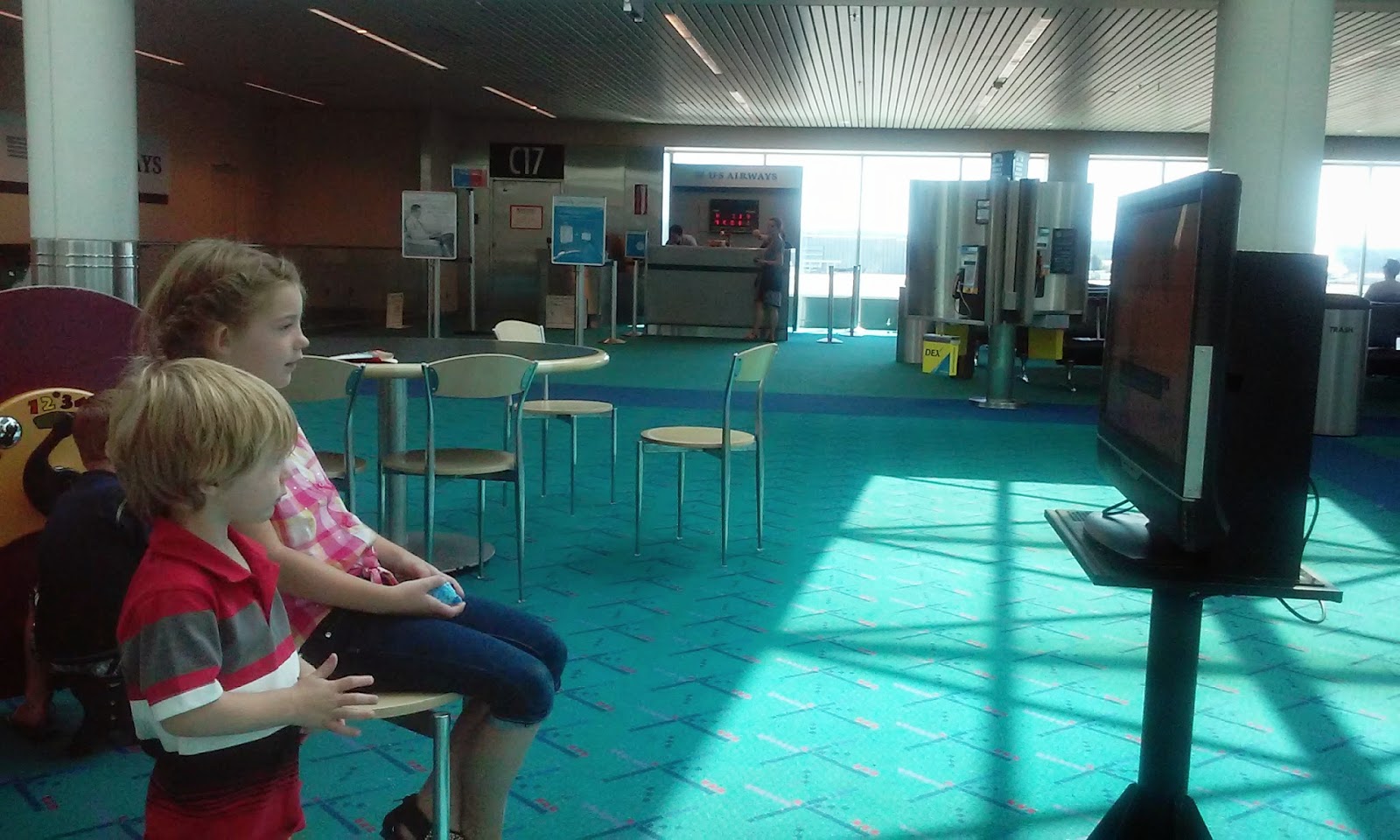 I was feeling like this trip was going to end on a high note after the bumps.  We were about halfway through the flight, Jude had fallen asleep in my arms about five minutes earlier after fighting me on it for most of the flight.  As he finally faded, I noticed he had something dark all over his ear.  He had somehow gotten a small cut on his ear and it had bled EVERYWHERE.  It was dark dried blood all over the side of his face.  But there was no way I was going to risk waking him up so I let it be.  I had all three older kids seated in the same row and I was in the row across the aisle from them.  Asher was closest to me.  It meant they could all watch the show together but I could still reach them and keep them from running amok down the aisle.

That is when I heard Scarlet say, "Mom, there's something wrong with Asher."  I turned just in time to see him start to vomit.  And then it just kept coming.  He was on round three before I was able to get the plastic bag to him.  It was everywhere.  All over the seat.  All over the aisle.  All over Asher.  Everywhere.

It was like time froze.  I could see Asher's devastated face.  I could see the disgusted, horrified looks of the people around us.  And I realized oh so very clearly with the baby screaming in my arm and the child covered in throw up crying that I had no idea what to do next.  I turned to face the woman next to me in a moment of desperation.  "I pushed the call button," she told me.

A flight attendant I will always remember with fondness came up to me.  He took my baby and handed him to another flight attendant.  He then suggested I take Asher to the bathroom and get him cleaned up.  Asher and I crammed ourselves into that bathroom, stripped him down to his undies and cleaned him up as best as we could.  When we left the bathroom, the flight attendant had adopted what looked like a full hazmat suit and had all kinds of supplies.  The cleaning of the chair was intense and thorough.  I was impressed.  It was about this time I remembered my baby's bloodied ear.  I felt like I maybe would not be complimented by the crowd at the end of this flight.

We survived.  Asher finished the flight in his underwear but he kept the rest of his stomach content down.  We found our luggage, found Jon, and went home.  I may have spent a little alone time in my room when we got there.  But I am happy to report now we all survived the experience.
Posted by Kacey Nielsen at 10:04 PM 10 comments: