The quality of this video is pretty bad but I have spent WAY too many hours trying to get it on here so we're just gonna be ok with it.

Oh and she is wearing a beanie indoors because I just made it and I'm trying it on...it's not really cold or anything. And the audio wasn't working... so this video kinda sucks. Oh well!

It is an awe inspiring moment when the little bundle of chubs who was just shortly an infant in your arms takes off on those roly legs. Of course the moment only lasts a brief second before *CRASH* another head into the linoleum.

Scarlet officially set her own record this morning by taking 10 steps all on her own. She has successfully accomplished the two and three needed to get her from toy to next standing point. But this morning I sent her off walking to her dad and as dad kept backing up, Scarlet kept walking. Some of you might ask, Kacey of course you got those momentous moments from your first child on video or you at least took some pictures? You know when your child decides to make great strides 5 minutes after you should have already left for church, who's fault is it when it doesn't get recorded?! I'll just tape the next time and pretend it was the first.

We got to hang out at Sam and Kyles yesterday and to our great luck Grandma Earl drove into town and joined us! It was a great evening. We carted the 3 babies to a little mexican eatery and had a good meal then put the kids down for the evening while we played some games. Jon introduced us to a card game called Mao. You start the game not knowing how to play and the goal is to learn them as you go. Grandma is NOT a fan of Mao. She graciously put up with the first three rounds but the fourth round was more than she could handle and her cards did not leave the table in front of her :) We had a great time.

Pictures of something interesting to come...
Posted by Kacey Nielsen at 4:23 PM 5 comments:

So much to say 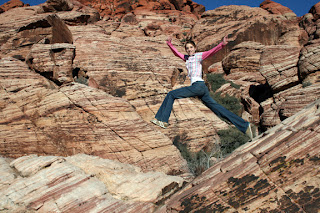 I have a lot of catching up to do so if you, my loyal blog readers, only scan the pictures I won't blame you in the slightest.
I just had an amazingly fun few weeks. My parents came down to celebrate Christmas with us in Las Vegas this year. I was so stressed about making sure we had enough planned and that every moment would be filled with fun so they wouldn't regret making the long drive down. I think all my planning worked... though they could all just be good liars.
They drove in Saturday afternoon and the boys (Jon, Bryan and my dad) headed to the BYU vs. UCLA game. The girls made a stop at Cafe Rio and then saw Mamma Mia. We had terrible seats, the absolutely last row, but the theater isn't all that big and they were really cheap so nobody complained too loudly.
Sunday, I got to cart all my family to our ward and my sisters almost doubled the population in Young Womens. There is a guy in our ward who is the head of lighting for Mystere (the Cirque de Soliel show) so we asked him if he could get us in. Turns out he had the whole week off except for later that evening... so we pulled the "hey, were on vacation!" excuse that isn't all that true and went to the show. We got there at 5:00 and got a backstage tour. We got to see all the costumes and props, we even got to walk around the stage. It was so awesome and made the show even more exciting for my brother and sisters. Not only that but we had amazing seats. It was such a blast.
Monday we took my family on a hike at Red Rock. It basically turned into one giant photo shoot... 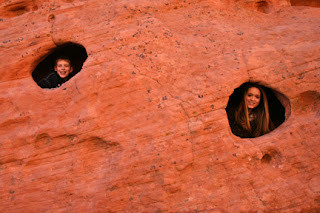 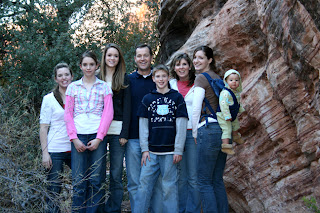 Notice how I had to go butt-towards-camera so Scarlet could look good?! The sacrifices of motherhood... 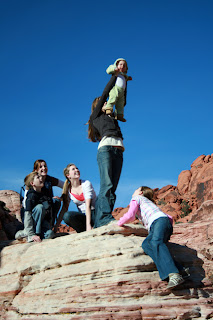 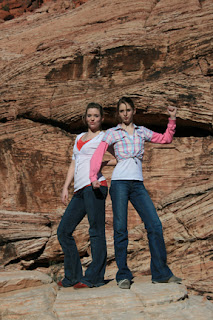 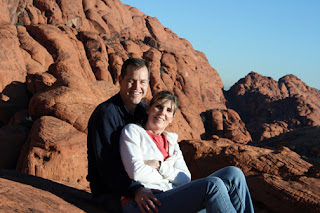 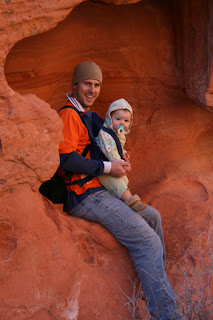 Then Christmas was here. We got to talk to Brad soon after we woke up. It was so great to hear from him. It is a pretty tough mission, he knows every member in the country by name, but he just sounds so confident and mature.
We opened presents next. Jon got me a new bedroom set which I absolutely love, I gave him a nintendo DS and a few games. Scarlet got a few presents from us but my mom bought her a ton of toys. I really expected her to enjoy a bit of the paper ripping and then proceed to ribbon chewing and general disinterest in everything given to her. I was totally wrong. Turns out Scarlet is the best present receiver I've ever seen. 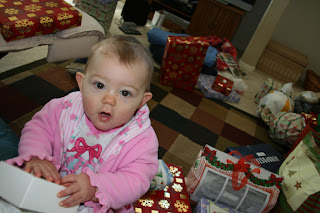 For example, Jon got Scarlet one of those big bouncy balls with disney princesses on it. She opened it while sitting on his lap and when she saw it her face lit up in a big smile. She hit it a few times to make it bounce then gave her dad a hug, then hit it a few more times, smiled at Jon and gave him another hug. Might be the cutest thing I have ever seen. She played with every toy she opened until we gave her a new one. It was so fun to watch.
I gave my parents tickets to Beatles Love for Christmas so they went and saw the show that night. The rest of us lounged in our pajamas and ate a lot of chocolate.
Wednesday we spent most of the day on the strip seeing some of the sights but we headed home early to get ready for Vegas night. 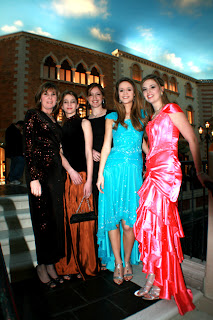 Vegas night was actually Jon's creation but it involved dressing up as gaudy and flashy as we could, going out to dinner, then going to see yet another show. Everyone looked fabulous! Courtney and Kylie wore some of their formal dresses and Kendall wore one of Kristy's and they looked so darn beautiful. 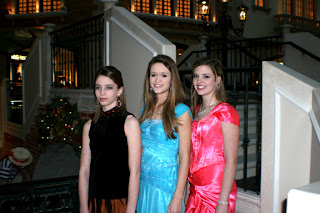 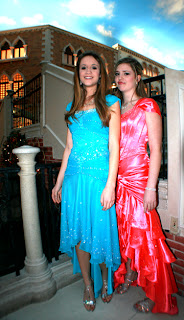 We went to eat at the Venetian and then we took some pictures around the hotel. For every flash of Jon's camera there were 5 other flashes behind it. There were SO many people taking our pictures! At one point Courtney and Kylie were off to the side when a large group of Chinese tourists walked by and almost every single of them asked if they could take a picture of them. It was too funny. 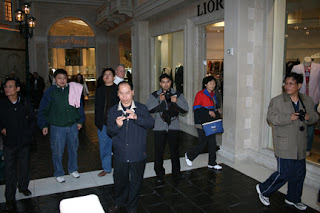 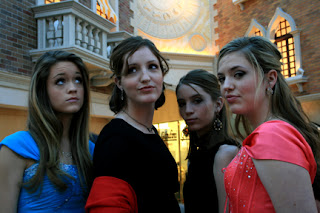 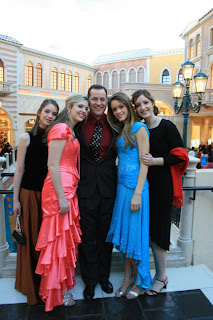 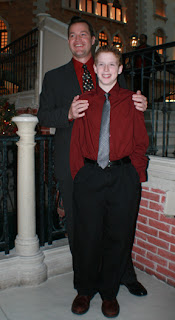 And then we saw Phantom of the Opera that night which was absolutely fabulous.
Thursday mostly involved shopping and eating good food as did Friday. We also got to see 27 Dresses, the movie with Kathleen Heigl. Totally enjoyable. Not necessarily one that needs to be seen in theaters but enjoyable. And James Marsden... great eye candy.
Happy 2008!
Oh P.S. we missed Kristy on Christmas day but we got to talk to her on Wednesday and she is also doing so well. Can't wait to go see her in April!
Posted by Kacey Nielsen at 3:30 PM 10 comments: